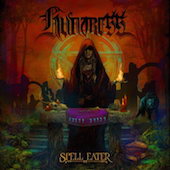 Enter Huntress. This is a band that has been hyped up by Napalm Records for the past few months now, with statements like “Lead singer Jill Janus is an operatic banshee with an unparalleled four-octave range” and “The universe spread her legs and delivered Huntress” ... and um, yeah. As you can see, they’re not very good at writing press releases.

Nor are the band any good at writing music.

Deep down though, a part of me was hoping that this would be at least half decent. Prior to the album’s release, I listened to some live clips, and let out mighty roars of laughter. Still, it’s good to keep an open mind about music, and to give bands a fair chance.

The music here is nothing special. It’s just your standard melo-thrash riffs which we’ve all heard eight thousand times before. The guitar riffs are similar to those one would write six months into the instrument, but refuse to use them later on anywhere, because they’re so shit. And normally, power metal bands will have this one lead guitar player which has spent all of his teenage years running scales and listening to Rhapsody, so he ends up being pretty beast at it. This guitar player will usually come up with some blazing guitar solos which add a dimension of “at least the leads don’t suck” to an album, but Huntress doesn’t have that, either. The guitar solos are unimaginative, boring, and on top of all that, poorly played. Granted, I didn’t come into this album expecting Jeff Loomis type mastery but come on.

None of the music here is memorable or remotely good. Granted, it’s not as bad as Debauchery, but that’s pretty much impossible anyway. But the thing that bugs me most about Huntress, which I just can’t seem to shake, is that they are a manufactured band. They were put together, in pretty much the same way Nsync were. The singer Jill was a topless DJ in Manhattan and did that for many years, until she got bored of it one day, had her tits done, and decided to join a metal band. The other four guys, poor souls, probably thought “Hey, this could be our big break” and went along for the ride. Even calling them a “band” is pretty insulting, as looking at their promo picture, all I can see are four guys dressed terribly in denim, and what seems to be a professional swimmer.

The only audience this band will find will be twelve-year-old boys (for the tits) and... I think that just about covers it. “Eight of Swords” huh? More like “Ate All the Cocks”. I can’t believe that I actually sat down and reviewed this before the new Cannibal Corpse or Spawn of Possession, both bands with good music played by, you know, actual musicians.

The only thing that surprised me about this album was the production and mix. These guys really did manage to polish a turd. It must have been a grueling experience at the mixing board, but they’ve done it. Of course, it sounds over produced and over polished – it has to, to mask the complete and utter musical failure they were paid to record. It’s all a copy/paste job in Pro Tools, and the singer does NOT have a four-octave voice – she has auto tune, and sometimes even that fails her.

You have been warned. If you’re the type who’s stupid enough to play with raw plutonium, then you’re most probably also stupid enough to listen to this album. I give this project an overall rating of eight – and that’s to the guys who drew the short straws to mix and record this thing. And they are probably on Xanax now.