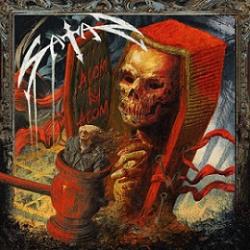 Drawing analogies between bands is one of my bad habits. At my worst I give you, dear reader, a woefully imprecise description. No two objects are exactly the same, and the closer the similarities, the less interesting the comparison. It’s easy to problematize your description of an original artist when using this method, particularly when talking about the great Satan.

Still, reference points can be helpful. The early releases of Iron Maiden are often attributed a more punk aesthetic and sound, despite Steve Harris’ oft expressed disdain for the genre. Well bollocks to Harris and all his musical genius, I’m tempted by a juicy bit of speculation: what might Maiden sound like if they took a different musical route? Let’s imagine the boys ditched most of their prog trappings, opted for regular bouts of trem picking, and maintained a speedy tempo with a more direct vocalist. Satan is about as close as you can get to answering my query.

Atom By Atom is Satan’s fourth full length, and the second release since the reunion of the Court in the Act lineup. It’s something of an unexpected success story, both because Satan had a pair of failed follow-ups in the ‘80s* (one released under the name Blind Fury), and because Brian Ross has become a minor legend with Blitzkrieg. Ross could have shoved himself into the meat grinder indefinitely. He spent roughly thirty years toiling in the shadows of the underground, cranking out surprisingly strong tunes with any number of musical mates who dropped by.

But Satan is an actual band, and they fired one of the last shots of the NWOBHM. Given the context of the UK in 1983 it was a gloriously (and somewhat blasphemously) ambitious shot. Talk all you want about Venom and Motörhead, and the hard road they paved for thrash metal; you’re not wrong for doing so. Satan removed most of the blues and the sleaze from that sound, and wrote a thesis of pure paranoia. Songs and guitar solos remained short and sweet, but still delivered tasty treats such as extra riffs, true harmony, and call and response. More than thirty years hence, Satan continues delivering these essential goods.

It’s difficult to parse the changes from the constants on Atom By Atom, perhaps in part because the NWOBHM is back in style. Brian’s voice is deepened and coarsened by age, and these cats likely listen to the sounds that they helped inspire, but the musical and lyrical themes remain. They’ve gone from bleeding edge to bled dry to passe to retro cool and patently never gave a shit at any particular moment. What’s surprising is that they still sound so… fun!

That’s not something a band like this is supposed to pull off now. The kids declined into old codgers, yet my ears are besieged by manic energy and youthful enthusiasm. Satan’s debut delivered a premature taste of thrash, and they have returned from the mutagenic slime pits to give the gift of speed metal. Really, speed metal. Hardly anybody plays speed metal anymore. It’s a footnote in history. This conceit works because of some truly remarkable songwriting ability, and a set of blokes who get on as if they’d never parted company. That’s more than any sane person asks from a reunion. Thankfully, Satan are thoroughly unreasonable.


*former Satan members also released three albums under the name “Pariah,” though sadly I have never listened to them

An energetic platter of traditional metal is put on by Satan. There is a glorious old school feel to this album and it takes a couple of listens to unlock. Each song bleeds the trait of being true of the metal genre and has this classic feeling wrapped up nicely. The songs are also very metal with an emphasis on the guitar riffs in the foreground.

The vocals present have that nasal feel that Mark Shelton from Manilla Road contains. Like the music, they take a bit of time to get used to, but do suit the music very well. The overall vibe of the band is straight from the classics and though this music has a standard aura, some will appreciate it from time to time. There is certainly some bravado and glory to be had with this album, but it takes some time to get into the riffs. As such, these guitar licks are memorable and potent. This album still fails to break away and grab legendary status. This is because there is nothing overly new or original to be found with this album. The album feels a little too ordinary at times and one would wish that Satan would take more risks. Still, within the context of old school music, there is a refinement to a great degree with Atom by Atom. The tracks are tight and focused in their approach.

There is also a sense of fun in what the band is doing. It seems they genuinely enjoy performing each track and this bursts through the exterior. Although those liking classic metal will find the most enjoyment here, there is certainly room for those simply looking for well-constructed songs performed. It might not be complete classic bliss, but Atom by Atom is a very solid listen.