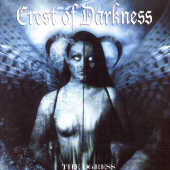 When you hear the term ‘Norwegian black metal’ you're usually accompanied by a visual image of the scene. Much of what started as obscure or underground has been brought to the public and presented as entertainment and to the detriment of it. Though some pioneering bands that began “trve” have now evolved and signed to major labels in so acquiring significant publicity, they're still a few relatively underrated bands prowling within the regions of black metal or at least what's left of it. Norway’s Crest of Darkness is a prime example, although they’re signed to My Kingdom Records, their music still holds firm to the primary philosophical values of black metal.

I discovered them sometime around 2007 by means of aimless clicking around on The Metal Archives, after I encountered Demonic Christ via means of a Danna Duffey interview. Following reading some information about Crest of Darkness’ targeted sound, lyrical themes and frontman Ingar Amlien’s passion for vampirism, I had to delve deeper. In my search for some music I found “Druj Nasu” and “Sinister Scenario” via audio samples that were uploaded to a now defunct streaming service. What an experience it was once I had heard how Crest of Darkness sounded, it felt as though a serum shot of musical ecstasy had entered my blood streams. Around that time, specially where I dwelled, accessing the internet and more-so metal was difficult, so hearing something of this nature was a bestirring of one’s-self to say.

The Ogress, released in 1999 via Listenable Records holds a close embrace to 1st wave black metal fused with some operatic singing, lots of keyboards, groovy rock and roll, progressive elements, spacy sounds, organs; just a joy ride through music. Starting out with “Eucharist”, Crest of Darkness makes their intentions known from the onset; showing the listener that they are more interested in moving away (not entirely) from the standard formula of black metal at the time. By keeping some aspects of the 2nd wave era and implementing a few different touches such as an overall varying approach to song composition, blended with acoustic guitars, technical drumming and vocals echoing varied black metal snarls, grunts and a weird type of shriek; Crest of Darkness were well set into establishing a sound that would set them apart from others. “Two Thousand Years”, “The Ogress” and “Eucharist” are impressive opening songs, possessing a compact mix of playing styles, they hold the listener/s attention with a growing excitement of what else follows, hence placing the bar ever so high in hopes of being exceeded.

Making an appearance on The Ogress are the female operatic and clean vocals of Kristin Fjettseth, wow! what a singer; her voice is so mellow and beautiful that I can’t help but put her in the same league as Liv Kristine. Her presence on the record, specifically “Eucharist”, “The Ogress”, “The Inheritance” and “Her Crown” add a welcome flavor to the music; a coating of mysticism and beauty that extols the keyboards played with distinction by Jan Petter Ringvold and Lars Christian Narum. I believe here presence on The Ogress is one of the main factors that had contributed to its longevity. Even after so many years the music still sounds so new to the ear as though rediscovering the band.

Also adding to the musical caress of Kristin’s voice, and the dynamic keyboard attack of Jan and Lars is the special appearance of musician Roy Khan on tracks “Reference” and “Sweet Scent of Death”. Having been involved with metal act Conception, his presence brings a progressive layer of sound to the album in contrast to other songs he’s not featured on. Matched with Ingar’s hypnotic bass and vocal acrobats, the mentioned songs could have easily passed as some of the best progressive black metal at the time and even now. To me “Reference” served as a breaking point or key interval that marked the jumping of the bar set on the first half of the The Ogress that would later be surpassed by installations such as “The Inheritance”, “Gift of Grace”, “Sweet Scent of Death” and “Her Crown”. Those truly showcased an even more unorthodox method of song structures with splendid guitar sections by Ingar Amlien sprinkled throughout them. Ingar as a front-man displayed immense talent in all his musical contributions on The Ogress, he is an exceptionally talented individual that only improved with time. To know that he is still active in making music is exciting to hear, as all albums following would demonstrate a decent level of intelligently introduced variation from prior entries.

Though recorded as mostly an ambient, symphonic mix of semi-technical black metal, The Ogress gave hints of what-else Crest of Darkness had in store. Given it was contrived in 1999, it endowed a slightly industrial sound that was beginning to take a hold of metal in both hospitable and unfavorable ways. In Crest of Darkness’ case the former is most applicable to what The Ogress exerted. That aspect is aided by the exemplary drumming effort put forth by Arve Heimdal whom contributed stellar work on Conception’s material, therefore, it was likely his work then would only bleed into The Ogress which allowed him to free his hands in exploring and exploiting the technical properties of his drumming.

It’s good to know Crest of Darkness is still active even though new members have been introduced throughout their existence leading up to now. The resplendent musicianship substantiated on The Ogress came as a result of the lineup; the members involved in the crafting sound as though they shared a bond and sagacity that was in-turn reflected thoroughly. Matched with the strength of the members musical skill and equipped with a production value that captures the peeking effect of each tone distilled, The Ogress competes against the notorious of the 90’s and current day. It’s a record that Crest of Darkness and more specifically Ingar Amlien can firmly stand by in calling a paragon of the genre.