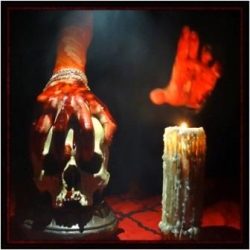 A well composed black metal album is like a dark curtain. It falls over the listener like a premature dusk that suddenly turns the day into night. Music and atmosphere stand shoulder to shoulder in this genre, meeting each other on an equal footing. Both trigger emotions that make black metal cover a broader range of feelings than almost any other metallic niche. Or is it a very emotional experience to listen to an album of Sieges Even, Rage or Carcass, to name three representatives of much less atmospheric genres?

Balmog masterly create atmosphere. The fundament is built by the great guitar work. In particular brilliant pieces like the menacing, furious and rumbling 'Bring vs, Guide vs' illustrate this in an excellent manner. It’s a song Watain would be proud of – and maybe the prominent Swedish flagship is generally a good point of orientation; at least if we are able to forget that this once highly esteemed formation has run into more or less serious trouble with its last two full-lengths. However, it’s not only the guitar work that gilds the majority of the songs. Balmog’s material has a ritualistic touch without hurting the iron frame of the subgenre. Especially some Greek bands are prone to celebrate a sonic ritual while forgetting their metallic roots completely. The hellish trio from Spain does not fall into this trap and so 'Der Flvche' offers the next highlight. By the way, please forgive the band the inflationary use of the letter “v”, this is the only slightly childish element you will find on Svmma Fide. Yeah, trveness is for you and me, not the fvcking indvstry.

Balmog’s compositions do not bore the listener with conventional patterns. Instead, already the song structures reflect the rebellious approach of the protagonists. A track like 'HΩshek' widely opens the door to a cold and dark dimension where no ray of light has ever gone astray. Despite its exaggeratedly excessive ending, 'Ascetic Penitence' does the same while delivering a stark contrast between the desperate guitar tones at the beginning and the hailstorm that breaks lose after the short introduction. The guys from Galicia always have a close eye on an apocalyptic scenario and they are able to bring it into full effect, even if they combine it with sacral choirs occasionally. The somehow misty yet still vigorous and voluminous production helps the songs to show their real strength and to convey a terrifying general sentiment. It’s a sound that does not reveal all secrets of Balmog’s music immediately, but it constantly draws the listener into the album. Only the pretty vapid outro of the A side lacks intensity, but that’s a venial sin. Nobody’s perfect – and the outro of the B side mirrors the calm after the storm in a very good way, although it is not dominated by guitars, but by keyboards that send distant mysterious signals from the aforementioned lifeless dimension. Incidentally, there is no reason to fear an overuse of keyboards, Balmog mostly do not integrate them

The music of Svmma Fide triggers exactly the emotions one gets when having a look at the artwork. The full-length sounds brutal and horrifying without showing cheap effects like guts ripping zombies or further nonsense. The musical approach is drenched with demonic juices, but Balmog do not peddle with blatantly violence-glorifying lyrics. They spread their horror with style, not only in view of the limited colored vinyl edition which contains a poster and a “book” with the lyrics. The band can still improve some details, but Svmma Fide is a great curtain, album or whatever else you want to call it.