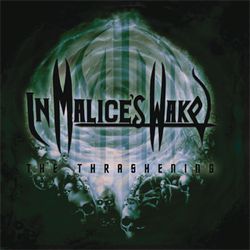 My favourite football team loses almost every match and my job eats my brain. Only the energy of pure thrash metal keeps me alive. This is where In Malice's Wake come in. Full of adrenaline, the band delivers 32 minutes of fiery sounds. It is a brief but intense dose of endorphins that the band injects. Take a seat in the thrash metal paradise and enjoy the liveliness of the compositions.

The album combines a modern, powerful production (which is equipped with a lot of reverb) with generic, more or less traditional song patterns. It is a fact that the Australians use only well-known tools in order to create their anthems. There are no special mysteries to discover. Anyhow, the songs hit the target. The band has never heard the term "tiredness" and its dynamic compositions leave no doubt that the restless guys are able to channel their energy skillfully. This applies to the vigorous lead vocals, but the vibrant instrumental section does not fall flat too. While relying on their instinctive understanding for the balance between unleashed parts and rather filigree sections, the band rolls over the listeners with eight ironclad vehicles. But avoid premature conclusions. Despite their heaviness, these vehicles are easy to maneuver.

Straight attacks like "Join Us and Fight" show the difference between "normal" metal and fanatic thrash. The combative song explodes right from the get-go and there is no chance to remain unimpressed. The guitar salvos appear as cannon shots. Unquestionably, they will find their goals. "Onslaught" conjures up pleasant associations of the British thrash kings, but its biggest assets are the ominous beginning, the carefully designed riffing and the catchy chorus. In view of the spontaneous method of the band, it comes as no surprise that this track also does not lack of straightness. Yet it does not matter at all from which point you start to explore the full-length. All songs have this infectious aura. The fresh guitar sound is only one of the reasons why convinced thrash maniacs will be infected by this album. For example, listen to the very lively riffing of "Evil by Design" that has the might to invigorate even the most jaded listener. Or feel the juvenile energy which is expressed by the rebellious chorus or the provocative riffs at the beginning of "Fuel for the Fire".

The handy output is short enough to avoid boring sections. Everything appears to be from a single casting and the signature of the spirited group cannot be ignored. The Thrashening is a very suitable name for the stimulating effort of the band. In saying this, I am not implying that the tunes lie in close proximity to those of a specific legendary role model of the genre. Old heroes like Vio-lence, Exodus or Forbidden have left their footprints on the road that In Malice's Wake are going. But with the glory of these pioneers in mind, the Australians have forged their own piece of red-hot iron. They do not take a time jump in order to bring back the mid-eighties. This is autonomous, intelligently conceived thrash metal of the 21st century and elements of other sub genres do not show up. That's a good thing. Thrash metal can stand on its own feet. And with talented formations like In Malice's Wake, it will not fall down in the near future.