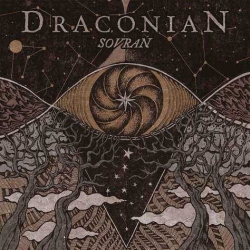 This is a doom metal album that simultaneously brings to mind the likes of the 11th Hour and Within Temptation. It has that dreary tone that is certainly one with the genre itself. The music here is melodic yet moody and carries a great amount of atmosphere. This allows the music to breathe with emotion and enrapture the listener.

One interesting aspect to this release is the duality of male and female vocals. I’m especially fond of the female vocalist that sounds a good bit like Sharon Von Adel of Within Temptation. The music is even more powerful because of the variety of vocal styles which lends itself nicely atop the remainder of the elements of the doom work. The guitar work is morose in a similar vein to what either Paradise Lost or My Dying Bride employs, particularly the latter. The remainder of the instruments complement this doom foundation nicely. Overall, the mood is one of despondency, but there are uplifting moments along the way as well. The music is catchy and brooding to equal effect. The replay value is derived from the strength of the riffs and this portion of the album is indeed strong. Thus, the listener will be left wanting to hear these crushing guitar riffs over and over again. With competition directly from My Dying Bride along with the likes of Crypt Sermon, there is an interesting roster of doom albums to listen to this year.

Though I prefer the My Dying Bride, there is an equal amount of stuff to like on this effort. Fans of the doom metal genre should lap this one up with no hesitation. I wish the band would attempt to establish their own identity a bit more. It seems this album is performed with precision, but it’s too close sounding to other band’s material. Despite this small flaw, there is an abundance of things to like with Sovran.