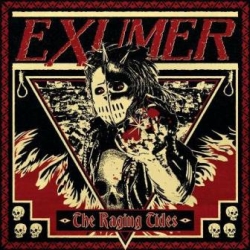 Come on dudes, you're kidding. The cover song of Grip Inc.'s ingenious classic "Hostage to Heaven" - inter alia with a guest appearance of Waldemar Sorychta, the composer and original guitarist of Grip Inc. - does not sound like an "exumerized" version but like the original tune with unexplainable minor flaws. Does it make sense? Definitely not. It just shows that even a good singer like Mem cannot hold a candle to the performance of Gus Chambers, the charismatic guy with the mohawk haircut who stole the metal community a fantastic lead vocalist by committing suicide. To change a well-known phrase of the Scorpions: Still missing you. However, this review is not about Gus. Of course, the fourth album of the semi-legendary Exumer is the matter.

The aforementioned cover tune is one of two bonus tracks and both songs are, to be honest, of minor importance. Allow me to exclude them from the evaluation. What counts are the ten new songs that Exumer have written. Some open-minded dudes will criticize that the group hates innovation and delivers only pure old-school. I say: this is the only school. (You call me an old ignorant bastard? My wife agrees.) High velocity marries lacerating riffs. The recipe is pretty simple, but the impact should not be underestimated. Large parts of the album are close to perfection, although the title track seems to be derived from Sepultura's "Arise". But that's no cardinal sin. More interesting is that Exumer like high speed sections, but they also do not shy away from songs which are based on mid-paced rhythms. "Shadow Walker" is an excellent example for this kind of approach. The bone-dry riffing reveals a merciless stringency and the decision against high speed does not affect the brusqueness of the number. Perhaps it sounds cynical, but it makes me happy that this band is always angry. Due to the emotional state of the guys, it is only logical that the abrasive "Catatonic" heralds the power of well-constructed mid-tempo tunes as well. An almost painfully simple riff and a precise chorus complement each other very well. Nevertheless, "Shadow Walker" is the slightly stronger mid-tempo assault.

Multi-talent Waldemar Sorychta has produced the album. Do I really need to say more? A merciless transparency meets cold brutality. As mentioned above, many songs are close to perfection, but the godlike production is definitely immaculate. It expresses the uncompromising ferocity of the ingenious sub-genre and bears the unmistakable signature of its maker. The result is that Mem's powerful voice has plenty of room to develop its full force and the same goes for each and every instrument. Needless to add that the guitars leave the most sustainable impression.

I was speaking about Sorychta's signature, but Exumer's dynamic tracks are also very typical. The vigorous band relies on its well-known song-writing formula. For example, the excellent "Sinister Souls", a mind-blowing thrash explosion, has a discreet touch of "Xiron Darkstar", one of the best pieces of their debut. The straight "Brand of Evil" with its rasping guitars and the effective chorus takes no prisoners and "Welcome to Hellfire" presents a clever tribute to Slayer after the "Decimating all in sight"-part. All these songs have in common that they are driven by the restlessly beaten drums and the list of extremely convincing speedsters could go on. Believe me, "There Will Always Be Blood", to name just one further example, possesses brilliant riffs, too. However, the crucial thing is that Exumer still have the necessary degree of conviction to present furious thrashers which endanger the listener's neck musculature. With regard to the careers of many comparable formations, this is unfortunately not a matter of course. Anyway, it feels good to listen to this detonation of thrash that avoids the use of keyboards, acoustic guitars and any other useless instruments.

The Raging Tides provides evidence that the initial wave of German thrash metal has not yet ebbed away. Exumer in their present form convey the spirit of the metallic mid-eighties that was based on enthusiasm, pioneering spirit and purity. I am talking about the glorious years before the role models had a lot of "good ideas" that followed the changing perspective of the eternal cocksucker called zeitgeist. You surely know this kind of ideas. Their execution resulted in lukewarm albums which did absolutely not work. It is not necessary to mention names in this context. I bet that even the guys of Flotsam & Jetsam share my point of view.