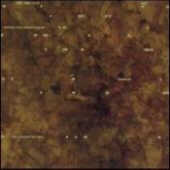 First up these are some of the most unorthodox and queer lyrics I have ever had the pleasure (or displeasure) of reading from an album booklet. Craw as some of you may be familiar with are composed of some parts of Keelhaul, and play an infectious of brand of hardcore/metal hard rock that is fast, heavy, energetic, grinding, slimy, and perky. Yet their new album “Bodies for Strontium 90” is often all of the above adjectives at the same time. Perhaps this gives some indication to the chaos and misanthropy that Craw induce when listening.

At their core, Craw deliver an album that is wild and very hard to work out what it is about. I have had this album for a bit over a month or so and I am still trying to work out where it is going. For instance vocalist Joe McTigh is something of a schizophrenic when it comes to barking out the tunes. One time he can be singing (term used loosely) perfectly in tune with a song (see ‘Caught My Tell’) and the next track he will be shouting or moaning some whimsical crap about the most trivial topics. For instance the song ‘Sex’ starts off with the opening line of ‘Walking through the park one day exercising the hairy eyeball in May I spied a startling example of female...” Pretty interesting, eh, if not a little left field?

That, of course it just a fraction of what Craw has to offer the world. “Bodies for Strontium 90” has been the hardest album I have ever reviewed. I love it, but I can’t really write down an accurate critique of it. It does so much. Pulls so many strings. And the lyrics are simply out of this world. How any sane mind can come up with the lyrical crap on “Bodies for Strontium 90” is well beyond me.

Bottom Line: “Bodies for Strontium 90” contains some of the freakiest tunes I have been exposed to. Ever. Craw twist and weave through 9 songs of trivial topics that are ‘enlightened’ with some of the coolest song-writing and music ever done for a record in this style. I don’t even know if I like this type of music normally. I just know I love this album. It doesn’t get much simpler than that. “Bodies for Strontium 90” is an essential buy.