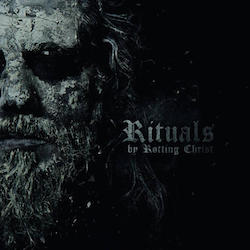 There are times before you actually listen to a new album by a band that you think you already know what to expect, but, once those first few notes play, you automatically know that your expectations were wrong and the album is not what you imagined. The newest release by Rotting Christ, Rituals is exactly an album like that, which will leave you wondering how this band keeps getting better and standing the test of time after 27 years.

When first seeing the cover art for, Rituals, I knew I was in for an interesting journey, but I did not know that journey would end with me getting goose bumps upon completion of listening to the album. The album starts by hitting you hard with the opening track, 'In Nomine Dei Nostri,' basically invoking Satan. I really like this track as the first one on the album because it’s appropriate for setting the tone and atmosphere; however, for me, it is not the strongest song on this album.

'Ze Nigmar' is a pretty solid track, which is spoken in Aramaic and performed in the most ritualistic way possible. It refers to the last seven sentences of Jesus on the cross according to the gospels. This track, along with the background of the song, provides a pretty haunting aspect to the CD. The fourth track on the album, 'Les Litanies De Satan (Les Fluers Du Mal),' is taken after a poem by Charles Baudelaire that denounces religion and Catholicism, specifically, and is an inspiration to Satanists today.

Although the album as a whole is excellent, the best tracks by far are the last two, 'Devadevam' and 'The Four Horsemen'. These two songs can almost go together as a continuation of one another and are an excellent way to end the album. After hearing both of these songs, I was left open mouthed, in awe, about how great Rituals is. This album would be a great addition to any heavy metal fan’s collection, especially if you are a black metal fan. It’s really hard now days to find albums that are great front to back; however, Rotting Christ did a great job with this release. Lyrically, musically, and spiritually, Rotting Christ’s Rituals captures everything a great album should be and more.