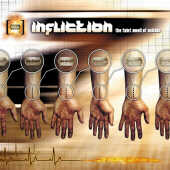 Is it melodic death metal; is it black metal or simply dark metal? Who can say? This is certainly a peculiar album. Not peculiar in a weird, bad sort of way, but peculiar in the fact that Infliction’s music makes them a hard band to pin down, musically. Bridging almost all gaps of current metal sub-genres, with notable flair and artistry, Infliction after 7 odd years have created an absolute SCORCHER of a metal album. Pure and simple.

I was speaking to a buddy of mine the other day about new metal bands worth checking out and I mentioned to him it may be worth his time to check out Infliction and their debut album. He said to me “Oh ok, for sure. What style do they play”? ‘Shit,’ I said to myself, ‘What style do they play?’ “Umm... well they are pretty hard to pigeonhole, man”, I told him, “But they do have five different vocalists for the album. “Kick ass,” he said in pure delight. I guess that would be one highlight from “The Faint Smell of Suicide”, the album features five different vocalists. From members of Mork Gryning, Ancient and long-time friends Night In Gales comes whispers, roars, screams, bellows, tranquil mumblings, clean sorrowful passages, vocal samples and every other possible style of bombastic singing you could possibly imagine for a metal album.

Vocals are cool, for sure, but they mean dick if there isn’t any quality music to back ‘em up. This is where Infliction really click. I guess seven years without a debut album and you just have to have a few good song concepts worked out in your collective heads. Vibrant keyboard melodies, dual guitar strikes, savage drumming and smart song-writing together with the doppelganger like vocal attacks makes “The Faint Smell of Suicide” an album very hard to miss out on.

The more I listened to this record, the more and more I got sucked into the huge vortex that Infliction have surrounded themselves in. I mean forget crack, cocaine, and all those other chemical substances... Infliction is the new wave of ecstasy.

Bottom Line: “The Faint Smell of Suicide” just reeks of raw commitment from a band to their musical trade and a desire for a whole album to work; not just for a few memorable sections here and there, but a ‘whole’ album. This is a slick, slim album with no extra chunky bits, but just a lean, mean fighting machine. Ladies and gents may I present one of the debut albums of the year (least from where I stand).