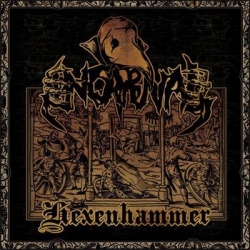 Type: Full-Length
Release Date: December 28th, 2014
Label: Independent
Genre: Death
1 By The Devil's Hand
2 Children Of Pestilence
3 We Were Born In The Eye Of The Storm
4 Masquerade In The House Of Gods
5 Baptized In Blood
6 Black Tongue Lithany
7 Bloodwritten
8 Eight Winds Of Chaos
9 Carnal Apostasy
10 Oath Of The Damned
MetalBite on YouTube
MetalBite on YouTube

Although this album was released back in 2014 it got caught in my sticky for death metal claws in December 2015. All that thanks to the intensified promotional activities of ViaNocturna. Despite the passing of time and due to album effects it was impossible for me to leave this position without a remark. Hexenhammer is the second full length album from the band but it is the first one recorded in a five-person lineup which consists of: Karol "North" Łapczyński - vocals, Krzysztof Kiecana - guitars, Alek Szymański - guitars, Mikolaj "Total" Kujda - drums, Mateusz "Raven" Szymanek - bass. These 10 pieces of strong, meaty death metal reeking of the devil take a little less than 41 minutes but I can guarantee to all metal maniacs that this time will not be wasted.

‘By The Devils Hand’ starts with the speech of the Lord Of Darkness, just like in a good horror film and with the sound of cemetery bells of course. It may not be particularly original, but it’s sooooo meaty. This section, those vocals, they make you want to listen. ‘Children Of Pestilence’ was vocally enhanced by Andrzej Analripper Papież (Sphere, Pyorrhoea, Revelation Of Doom), and video released for it supports the promotion of the album quite nicely. Rapid onset, release, acceleration, breakdown and then acceleration again, here comes another track from the CD, this is ‘We Were Born In The Eye Of The Storm’. Like most of the numbers on the disc, that one is mainly kept in medium tempos with a great melodic theme. ‘Masquerade In The House Of God’ was partially decorated with a movie theme and incidentally, greatly intermixes climate to a piece. It’s a perfect example of production professionalism. In ‘Baptized In Blood’ Artur "Chudy" Chudewniaks (Trauma) throat makes an ‘appearance’. It's one of the faster numbers with a great breakdown and solo in its second part of the song, and the ticking cymbals portend something disturbing. ‘Black Tongue Lithany’ begins with an interesting classical guitar prelude and for a variety; this is the most moody track on the album in which only drum work breaks its convention sometimes. ‘Bloodwritten’ is a fast, less than two-minute shot in the mouth preceded by the Wolf's Hour announcement from classic horror films. Turtle-speed beginning for the ‘Eight Winds Of Chaos’ has a recurring motif and reminds me of the work of Morbid Angel. The penultimate ‘Carnal Apostasy’ is just another injection of blood energy, which, according to a mathematical scheme, should foretell something slower. Nothing could be more wrong, Incarnal is not math, it’s five guys that grew up listening to older guys from bands like Immolation, Vital Remains, Morbid Angel, etc. Marching ‘Oath Of The Damned’ entertains our manic ears with death metal thumps.

So here goes 41 minutes of death metal a'la Incarnal. I know that many nay-sayers will raise a cry, that this album is nothing new, but I have this talk deep in the abyss of my rectum, because, although you can actually indicate a clear influence of certain bands, I know that Hexenhammer is an interesting and honest album torn from honest hearts and guts of these five Poles. I’m with those guys and I will wait patiently for another piece of meaty death metal from them.