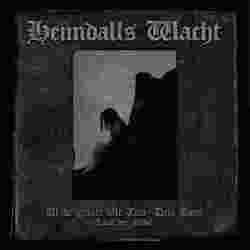 I read a few professional reviews for Ut de graute olle Tied... and I thought that this could be a strong album with a very interesting concept. I was wrong. Heimdalls Wacht is a kind of synonym for senseless noise, at least in terms of this full-length. The band wants to create dramatic songs, but the guys fail completely to evoke great emotions. They simply overestimate themselves. For example, the first regular track after the intro is stuffed with different voices. Clean vocals meet hysterical screams and a narrative voice shows up as well. Very intellectual, very sophisticated, everything is meticulously elaborated, I am really impressed. But at the same time, I am sorry to inform you that the song does absolutely not work. The guitarists commute between harsh and emotional tones without delivering any kind of thrilling riffs or leads. Well, the compressed, emotionless guitar sound and the rheumatic snare drum are also not helpful in this context. Simply speaking, this overlong number kills 13 minutes of your actually precious lifetime.

One may say that I prefer rather simple songs in general (and I agree). Therefore, maybe I am not the right person to criticize the excessive tunes of Heimdalls Wacht. So, what. Firstly, there is an exception to every rule. Secondly, add ten or even twenty percentage points and the result is still miserable. Apart from that, I am quite able to realize some quality differences between the single tracks. "Conspiratio Barbarica" also fails to make my day, but the break after 2:54 minutes is well done and shows a certain determination to break up the endless (and boring) guitar lines. But instead of creating a strong second half of the tune, some melodic choirs and the return of the narrator ruin the song finally. Hell yes, the vocals are the main drawback of the album. The different styles of singing are completely useless, because they create only one emotion: absolute frustration.

Heimdalls Wacht deliver some fairly de-escalating parts and the nonsensical intro would be a suitable soundtrack for the next yoga exercise of my wife and her weird gymnastics club. But I do not need this kind of music and excessive "Ohoho"-parts, which show up during the fourth track, are always embarrassing. Consequentially, the first song that reaches an acceptable level is, despite its senseless title, "Schwarzmondritual" (what a childish word creation!). Equipped with a proper amount of harshness, this track indicates the potential of the group. Only the different voices disturb the relatively good overall impression, but this is no surprise after having listened to the first four tracks.

"True spiritual heathendom and esoteric old-school worship" - the band describes its style with these words. I don't want to be the old asshole who always knows everything better. But as much as I regret it, I cannot find the smallest traces of spirituality or esotericism. Greek bands like God Macabre or Acheron show these elements in a skillful manner, but Heimdalls Wacht lack of any form of spiritual profoundness. At best, one can say that the group offers an intense experience. Too bad, that intensity has no value in itself.

Some rarely occurring good parts are not able to keep the album above water. Heimdalls Wacht sound a little bit like the guys of Nagelfar in their worst moments. The rescuers of the German genitive ("Des Wolfes zottiges Fell") use every opportunity to demonstrate the tremendous gap between aspiration and reality. Therefore, it is a logical step that the album ends with a gruesome, insubstantial ballad. Its only advantage is that it does not show any signs of commercialism. And this applies for the whole album; Heimdalls Wacht are not avaricious. Therefore, they earn our respect. But this alone does not mean that they make good music. It seems as if the "land of fog" (= "Land der Nebel") has clouded their sight.