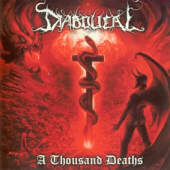 Sweden's Diabolical have been floating around in the metal underground, slowly making a name for themselves since the mid 90's. 2001's "Synergy" was a decent effort, but didn't do much to warrant repeated listens. Their new album "A Thousand Deaths" is an entirely different beast altogether, and should get this band the respect of the metal community they now deserve.

First things first, Diabolical's music is nothing too original, as they have both boots firmly planted in the Swedish Death/Thrash genre, with vocals more akin to black metal (think Thomas Lindberg circa 'With Fear I Kiss The Burning Darkness' with a little more power and you’ll have an idea). What sets them apart however, is the tremendous energy and seamless song writing on "A Thousand Deaths". Each song on here is a fucking killer, and you can really feel that they are pouring their hearts into each and every note.

After a mandatory intro ‘A Thousand Deaths’, ‘Children of the Mushroom Cloud’ blasts through the speakers to pound utter metal ecstasy into you bleeding brain. The song is tight and well assembled, full of intricacies that reveal themselves over repeated listens. If this song doesn't get you headbanging and your heart pumping, than you don't like metal. The following track ‘God Of The Underworld’ is quite as brutal, but showcases some amazing melody along with a tighter than hell rhythm section that never lets up. It's rather pointless to do a track by track review of this album because each is track is amazing, and can stand on it's own, with a distinct identity, so it never gets boring or repetitive. Although, if I had to pick some highlights, they would be the aforementioned ‘Children of the Mushroom Cloud’, the masterful ‘Until The Day Arrives’ and the epic ‘An Opposite Law’.

Production-wise, this album is flawless. Each instrument is clearly audible, the drums in particular are very powerful, with a great snare sound. The production also maintains a grittiness that gives the material a great "take no shit" atmosphere.

As far as the members’ musicianship is concerned, each member of the band is a master of their instruments. Lead guitarist H. Carlsson is a shredder if there ever was one, and his energetic solos all over the album make me want to hang up my guitar in shame. Carlsson and his partner have laid down some of the most infectious riffs I’ve heard in a while. The drums are powerful and uncompromising, with an endless array of fills and rhythms that never get boring. Vocalist Magnus Ödling has a voice that demands attention; it's vicious, powerful and clearly audible through the entire album, and he mixes up his delivery to keep things from ever getting monotonous. The band never sacrifices melody for aggression, and vice versa... Diabolical does an excellent job of balancing the two. The beauty of Diabolical is that they take familiar metal concepts and ideas and play them with such flawless songwriting and conviction that it sounds fresh... even to my jaded ears. The result is a crushing album of memorable songs that no should be heard by every metal fan.

Bottom Line: While not blazingly original, Diabolical with "A Thousand Deaths" have created a solid album that will keep you hooked all the way through that no death/thrash fan should miss!! Highly recommended.