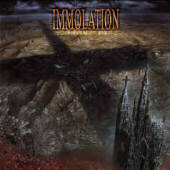 Nowadays when I listen to death metal I’m fairly skeptical. There are so many bands creeping out from every single nation that it’s overwhelming; finding a good band is like finding a good album in a mainstream record store. Look long enough and you’ll eventually stagger across something absolutely worthy of your attention, and for 2002 Immolation’s “Unholy Cult” is amongst the very best.

I honestly don’t know exactly what it is about Immolation and their new album, “Unholy Cult”, that make it so appealing. Initially “Unholy Cult” might come off as a typical, run of the mill death metal album that doesn’t bring anything new to the table. To an extent, that might be true, but if you listen a lot more closely to “Unholy Cult”, you realize that there is quite a bit more than can be picked up from Immolation than the typical tried and true way.

Quite a bit of the riffing is completely off the death metal base, often touching in the area of rock. The guitars don’t sound like what you’d typically hear from a death metal band, yet everything they do just screams pure, blistering death metal. The riffs, as well as everything else found on “Unholy Cult”, are downright sinister. Despite the fact that pretty much all of “Unholy Cult” feels absolutely threatening, it somehow holds the quality of being catchy. Not in a bad way, of course, but just the fact that everything you hear on “Unholy Cult” will be sucked up by your brain like it’s a sponge. It’s certainly not limited to the guitars – Ross Dolan’s vocals are amongst the best in the genre, and Alex Hernandez’ drumming is very apocalyptic.

Immolation has this uniqueness about them, but at the same time what you hear on “Unholy Cult” has a feel of familiarity. Make no mistake about it, Immolation is pure death metal, but they manage sound unlike other acts.

Bottom Line: “Unholy Cult” is an album that doesn’t lose Immolation a shred of credibility when it comes to their position in the modern death metal movement, yet at the same time Immolation has put together an album that is well above what their contemporaries are doing.