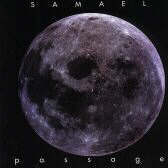 “Passage” is a double CD. I hadn't heard a lot of Samael when I picked this up on the recommendation of a friend, and was somewhat overjoyed to find that I was getting an instrumental cd alongside the metal one.

The way this works: “Passage”, disc 1, is the Samael we know. It's heavy, full of industrial elements and orchestral noises. “Passage”, disc 2, is the majority of the songs on disc 1 redone with synthesizers. It's not as cheesy as it sounds.

Samael weave a splendid sound-scape, and I find “Passage” to be one of the few albums I listen to all the way through. The guitars are quite heavy, with a fat distortion topped off by metallic "crunch" in the top end. It opens with a killer riff, and holds your attention quite well throughout. The guitar is innovative without sounding too simple, and it's refreshing to hear a really thick guitar sound. I don't know if there IS a bass in this, and strangely enough, it doesn't seem to need it. If it's there, it's so far back in the mix that it's indiscernible. The keyboards play a much larger role. Most songs have a deep choral keyboard effect over the majestic riffs. This gives the entire album a grandiose feel - and you almost picture Vorph (however you picture him) standing in front of a choir. It just has this intangible power to it. Xy, the keyboardist, also programmed the drums on this. I've read that he spent twice as long writing the program for the drums as he would have writing the drums the old-fashioned way. To substantiate that claim, they're very good programmed drums. The bass is low and the snare is tight - they're done in such a way as not to detract at all from the overall effect, though if you pay attention, you can tell that they're not real. Track 5, ‘Jupiterian Vibe’ starts out with tribal-sounding bongos. Very different.

Vocally, this album is interesting. Vorph's voice isn't so much a growl as a low rasp, and he doesn't so much "talk" or "drone" as he seems to almost lecture. The effect changes with each song, but he almost seems to be preaching, giving advice, almost. It's a voice that I enjoy listening to, and I'm not sure why. His lyrics are also interesting. I've regularly described Samael as "the only metal band who sing about agriculture." And they do. The lyrics run the gamut from the more typical type of self-empowerment (‘My Saviour’) lyrics, to the outright sci-fi. This allows for a nice blend of styles across the album.

There's some bizarre vocals in ‘A Man in Your Head,’ which seems somewhat silly to me, but they're reminiscent of the "Viking singing" on some Black metal albums.

So many metal albums are produced so thinly that you need to boost the low end a lot. With “Passage”, I'm listening to it right out of my Cd-Rom into a good pair of headphones, and it's nicely balanced.

Notable moments on disc I: The intro to the album, ‘Rain.’ It's a killer riff, and the song's catchy. ‘My Saviour,’ track 4, flows very nicely. The pinch-harmonic riff in ‘A Man in Your Head,’ track 11, is quite good as well.

“Passage”, disc 2 is something that's gained quite a respectable spot in my CD collection. The keyboard versions of the songs off “Passage” (less a few, and plus a few others from the Exodus EP) aren't merely the original tracks stripped of guitar and drums. They've been entirely re-sequenced and had some impressive piano work laid overtop. The album is a good listen for anyone, but some metal-lovers might not like its softness and relative accessibility.

Notable moments on disc II: ‘Der Stamm Kains,’ track 6. This is a version of ‘Tribes of Cain’ off the Exodus EP, and it's fantastic. Gets stuck in your head. I've had metal-haters demand for me to play this song.

Bottom Line: “Passage” (both discs) is a bit of a triumph. It manages to hold a listener's attention through well-crafted music, with creative and interesting lyrics. Below the surface lies a metal album with a lot of soul. I know, "soul" is a bad term to use, but it's got it, whatever it is. Great albums, worth the trip, and listen to it on the way home.