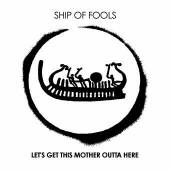 Ever heard of these guys? If your answer is no, then I don't feel so lonesome anymore. If you say, "Yes, of course" then I feel very alone and kind of foolish. What Peaceville has done here, was to gather some of the best of Ship Of Fools and had the decency not to call it something like "Greatest Hits" or anything that scary. Who are they? Well this band was, back in the nineties, kind of associated with Ozric Tentacles for their style. Too bad the British ended their trip in 1995, because one can really wonder what they would be doing music wise with this new century.

Made of nine instrumental compositions, which is already a good point for me, no metal involved here is the next thing that needs to be precised. Experimental Psychedelic New Age might be a good starting ground to describe the musical direction of “Let's Get This Mother Outta Here”. Greatly inspired by the sixties and its feeling of peace, love and LSD even to the point of having this drug as a title, in this case holding position number two. Other hippie like titles are included such as: ‘Diesel Space Ship’, ‘Where Is Here’, and ‘Guidance Is Internal’. The question here is: are these the products of drug uses or where they inspired by those who were creating music when using drugs. This is pretty hard to say. One thing for sure is that you don't need to be on drugs to enjoy this type of music. The only thing you might need is an open mind and a will to discover (or re-discover) something different and somewhat relaxing feeling just like an ear massage.

You would have guess that with two keyboard players this is the instrument driving the music. But that's not all since on many tunes, you'll also get samplings, strong bass lines, and efficient but non-aggressive drumming partitions. Spoken words add their touches here and there. The compositions are quite complex but always melodic with keyboards galore. One of the most interesting experiment is on spot number three and has a very spaced out name ‘Where Is Here’ and involves great key sounds, good and strong percussions and strange guitar chords. The follow up to this one is called ‘First Light’ and it begins with birds’ sounds, cool keys, and strange vocal effects. Later on in the piece, you can hear some church organ on overall very good melodic lines. The absolute "killer" of this album is ‘From Time’ with its 14:27 running time. Everything is included on this awesome opus starting with sound effects, strange voice, symphonic keys, strong bass, drum lines and good ol' fuzz guitar. A bit later on, it gets calmer and the guitar notes become cooler with tremolo bringing you toward a pretty dreamy passage. Now that's what I call a good experimental piece. Many little extra treats are offered to please your ears such as: Hammond organ, flute and a very special guitar sound just like it used to be in the sixties.

From what I can gather of this rather obscure nineties act, Ship Of Fools surfaced from the English “free festival” scene, which started in the seventies and continued even throughout the nineties. Bands like Mandragora and Ozric Tentacles, as well as Ship Of Fools, supported this early scene. Before Ship Of Fools disbanded, they left us with two albums, “Close Your Eyes” and “Somewhere Out There”. Peaceville Records is now releasing an album that compiles the best songs off those releases, remixed and all, titled “Let’s Get This Mother Outta Here”.

One of the most notable things about Ship Of Fools is that keyboardist Les Smith of Anathema was in the band. It’s very obvious, seeing as keyboards and sound effects dominate every little bit of this album.

If you’re the type of listener that is easily annoyed by electronically dominated music, turn around, walk away, and cover your ears. Keyboards and effects are the base of Ship Of Fools compositions, and they’re also the coating. Only somewhere in between the two will you find other instruments. If you can get past that, you’ll be able to realize that Ship Of Fools carefully construct their music so that it flows throughout, seamlessly making its way from one segment to another.

Although the conventional rock instruments don’t cloud Ship Of Fools music, make no mistake about it, they’re still very much part of the music. Drums, guitar, and even the occasional flute as well as other instruments are buried underneath the highly textured landscape of sound. As a listener, you’ve got to pay more attention to the music to get all the details.

Bottom Line: While I generally don’t listen to music that is along the lines of Ship Of Fools, I sincerely enjoyed the band. “Lets Get This Mother Outta Here” should be an album that most people will be able to speak positively of, if not adore it.