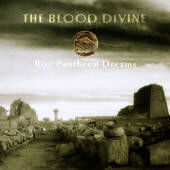 During their short career, The Blood Divine released two albums: "Awaken" (1996) and "Mystica" (1997). Peaceville being in a retro mood nowadays, came up with a compilation from their studio albums. Just like they did also with Ship of Fools, this album has an original tittle. The British act was made of Darren White(ex-Anathema) on vocals, Steve Maloney on bass and musicians that have been involved with Cradle of Filth at some point: Paul Ryan on guitar and back vocals, Paul Allender on guitar, Benjamin Ryan handling the keyboards and finally Was Sarginson beating the drums. After the band broke up in 1998, Darren White formed a band named Dead Man Dream. Let's have a look at what's to discover behind those 14 songs and see what we've been missing here in North America.

The Blood Divine was able to deliver a nice blend of Heavy Metal, Blues and Doom into their musical phrases. The vocal parts are mostly clean and rough but sometimes Darren gets a bit closer to what we call Death vocals while remaining easily understandable. The riffs are great and numerous. The keyboards take on different colors but remain always unoverwhelming in their appearances. You'll get to find them cool, symphonic and even psychedelic. The percussions and bass are always there to keep the beat but never really aggressive or dominant. Some compositions are more into the traditional Heavy Metal path such as 'Revolt', 'Enhanced by your Touch', 'Crazy Horses' by being fast and raw. They are also short tunes lasting around two minutes. Variety is present on this recording and 'So Serene' is the perfect example by being the longest number with its 9:19 of running time. The intro here is slow and ambient, progressing neatly with instruments addition and speed picking up until becoming a good heavy number with great guitar riffs, symphonic keyboards and this is one of those moments when the vocals put on an almost Death facade thus unveiling an excellent Doom composition. This song is by far my favorite and I think the band would have like us to remember them by this superb piece. The same type of Doom feeling is present on other occasions like on songs number five and six having for tittles 'Wilderness' and 'Sensual Ecstasy'. Some kind of tribute to Jimmy Hendrix went between the lines of 'Visions in Blue' with the type of lead and solo that is being done on the guitar. The other strong points to notice are the blues feel, the vocal effects, and the nice organ sound on a pretty heavy melody.

It's too bad they disappeared since they had everything to succeed. We can only be glad that Peaceville brought under the same cover all their best offerings but on the other hand we can only be sad since there won't be another release from this band.

Bottom Line: We can only whished that this would have landed in America earlier...

What more could we ask of Peaceville Records than for them to serve up another fine look into the past of another band. This time it’s Darren White’s (ex-Anathema vocalist) The Blood Divine. “Rise Pantheon Dreams” is a nice mix of songs from both of The Blood Divine’s two studio albums, “Awaken” and “Mystica”, as well as offering a few other goodies.

When The Blood Divine formed they picked up the same doom metal style that Darren White was most comfortable in, but they also have a sharp hard rock edge to them that is very apparent in nearly every song on “Rise Pantheon Dreams”.

White still croons over every note like he used to, but his performance fits the music exceptionally well due to his vocals having that low hard rock tone to them. That doesn’t make up for his need to do himself out of his moaning that is about as smooth as rubbing your face against sandpaper, but there is something appealing about his style.

Guitarists Paul Allender and Paul Ryan have an interesting thing going for The Blood Divine. While much of the music has that doom/gothic feel to it, their rhythm has a very apparent tie with nineties heavy rock, as well as with the solos that are in most of the songs. You also run into some slight classical guitar work along the way, but nothing neither abundant nor technically amazing.

Keyboards do make their appearance quite a few times in ”Rise Pantheon Dreams”. An excellent backdrop for the rhythm and melodies, the keyboards tend be used more for atmosphere than anything.

As an album “Rise Pantheon Dreams” flows rather well considering the fact that it is comprised of material from two albums, as well as two unreleased songs, a limited song, and two live songs. While it does have it’s rough moments, and even some that are downright nauseous, “Rise Pantheon Dreams” as well as The Blood Divine are a band worth recommending because they do have those shining moments.

Bottom Line: By no means a great album or a great band, “Rise Pantheon Dreams” still has its fair share of good moments and is directed towards fans of Darren White, or those who enjoy the mood of doom metal that doesn’t stick to those rigid boundaries.