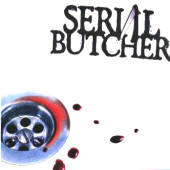 Belgian death metallers Serial Butcher are a band that is now one band that the metal scene in Europe is talking about, and with all honesty, deservedly. I get to review a very early EP the Belgian Death Metal squad had released way back in ‘02... showcasing the band's rise to challenging for the Extreme Metal top rungs.

Serial Butcher’s 2002 self titled album is not very impressive upon the first listen I took after getting it, I have to admit. Upon having three other listens over a week it becomes more and more clear that even back then, they have some talent. It is the trouble of being a new band overshadows all of those good things going for them.

Insanely frantic as it is brutally heavy, Serial Butcher throws out a title wave of Death Metal that holds great melody in every note while still taking your head off of your shoulders in the process. Its greatest power is its riffs, but very tinny production and some sloppy moments steal away most of the power it has made. Vocals are mostly lost in the mix, the drum sound more
like beaten up tin cans, making the album a mass of serious confusion of noise instead of the contained ferocity and musical powerhouse that they end up coming to be known for in the future.

It is these so overwhelming and very glaring problems, that stop this Serial Butcher’s album dead in the water, and have it sink into the abyss below the waves. Their other releases musically and lyrically did get better by leaps and bounds, and really show that they have crawled out from being a third rate Cannibal Corpse clone to being a band that is forging a new path in Death Metal history. This album though, does not show what they are now.