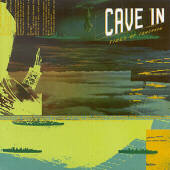 When Cave In released their shocking album “Jupiter” I wasn’t sure if the band was just changing their style, or if they would end up being one of those respectable bands that would continue to progress with each album. I had the impression that they’d be constantly evolving due to “Jupiter” being so experimental, but I couldn’t be sure. Now, Cave In has released their six-song EP “Tides of Tomorrow”, which answers all the questions I care to know.

Yes, Cave In do care about continuing to push themselves and progress. It’s evident just by listening to the songs on “Tides of Tomorrow” and “Jupiter” and then comparing them. Cave In are still holding true to their roots while they manage to move forward.

As far as musicianship is concerned, Cave In has improved even though they were great to start with. Adam McGrath still has his incendiary guitar tone that is present all throughout the music. McGrath, along with Brodsky, keep the songs quite guitar driven. However, Brodsky pays as much attention to his keyboards as he does his guitar. Effects on “Tides of Tomorrow” are omnipresent. They color the songs and give them quite a bit of depth. Brodsky being the talented man he is also takes care of the vocal duties. He just continues to improve. First it was the drastic improvement from the “Until Your Heart Stops” to “Jupiter”, and now Brodsky is fine-tuning his performance. He does an excellent job with vocal melodies and harmonies, range, and his confidence has skyrocketed. Drummer John-Robert Connors has never sounded so good. He is very creative and makes his drumming a real part of the song instead of just being at hand to keep the time. Quite a feat considering all the layering involved in Cave In’s music, but he pulls it off. It’s great that even bassist Caleb Scofield has room in the band instead of being lost in the mix. As I said, Cave In are superior musicians and they only take as much of the spotlight as they should.

The songwriting on “Tides of Tomorrow” may be more straightforward and less experimental than the music on “Jupiter”, but it’s improving ad infinitum. The songs are more tightly strung than they’ve ever managed to be. They continue to flow throughout each passage without being snagged by any loose ends. Cave In also continues to be able to incorporate multiple moods on their music, from melodramatic to positive to aggressive, and more. Somehow, throughout all the musical layers and the shifting moods, and everything else that goes into their music, Cave In still comes out on top as a supreme force instead of some band that’s just trying to be different.

Bottom Line: It’s never to late to experience Cave In’s mastery. “Tides of Tomorrow” is surely an EP worth the cash, not only for it being a decent length of six songs, but because of the quality it holds. If Cave In continues to hold their standards this high I don’t know how I’ll be able to handle their next full length.