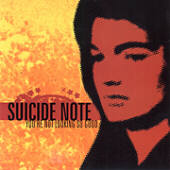 You’ve got to love it when you just stumble across a remarkable band when you weren’t even expecting it. It is even better when that band is still young, only then releasing their debut album. That’s what happened to me with Suicide Note, and their new debut album "You’re Not Looking So Good". Let me let you in on a little secret: metal-core rarely sounds this good.

Musically, one could classify Suicide Note as falling somewhere in between the sounds of the mighty Zao and some form of emo and punk. Suicide Note also show signs of being influenced by "Until Your Heart Stops"-era Cave In. However, around ninety percent of Suicide Note’s music is most closely related to the hardcore field.

When I went back to listen to "You’re Not Looking So Good" for a second time, the first thing that I noticed was that somehow the music seemed so familiar. I realized that it’s because Suicide Note have the ability to write some amazingly catchy riffs that don’t sacrifice even one shred of dignity. If you’re thinking it might be because the melodies on this album are basic and simple, I can assure they aren’t. Suicide Note just have that extra touch that pushes them a long way.

Suicide Note isn’t only bound to great melodies. They make an excellent connection with raw emotion in their songs. They somehow make something as primitive as anger seem deep, when most of the time it’s just caused by some act of barbarianism. Even the manic screams of Casey Donley fit the energy of the songs so well and seem to carry some form of semblance, not being there for the sake of being heavy. Listening to Suicide Note, you can somehow tell that when they play their music they put themselves into it one hundred percent.

Throughout the thirty minutes of "You’re Not Looking So Good", Suicide Note rips their way through so many different ideas. The composition abilities are good though, so you won’t be exposed to any cut and paste riffing. While the album follows the general theme of being intense and heavy, melody is abound everywhere on this album, from the extreme side of it to the times when Suicide Note splice in some clean vocals and clean guitars. The last thing to be aware of when it comes to Suicide Note is that you better be prepared for some whip lash, because there is no way that someone can avoid the grooves of songs like ‘Reno and Blood,’ ‘Amputee Supermodel,’ or ‘Come On Fuck Me’.

Bottom Line: The reason I can enjoy the over-saturated metal-core scene is because of bands like Suicide Note.