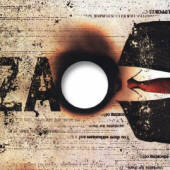 After my first listen of the latest Zao record “Parade of Chaos”, the only thing running through my head was the question “Who are you and what have you done with my Zao!?”. I just didn’t think a band as solid as Zao could become only decent, or that Zao would actually let the band get to this point. I was wrong though, and as one can clearly see from listening to “Parade of Chaos”, Zao have left us with one disappointing swan song.

Except for the excellent vocals of Dan Weyandt, nothing else sounds like it should have if Zao continued to progress naturally and take their time. It feels like “Parade of Chaos” was a rushed effort. The drumming of Jesse Smith sounds completely uninspired, leaving something to be desired after being exposed to his talent on previous Zao material. He sounds as if he’s just going through the motions and keeping the beat - not playing with the conviction he has, or used to have for Zao. Many of Scott Mellinger’s guitar parts are also lackluster, ranging from the uninspired riffs to the generic power chords. Only on songs such as ‘Killing Cupid’, ‘The Buzzing’, and ‘How Are The Weak Free’ do you get anything close to what Zao used to offer.

This time around Zao also thought they would try to bring in a few electronic passages. I admire Zao’s effort as progressing and bringing in new things, but they aren’t good with straight-out electronics. Maybe if they stuck around for a few more albums they would have gotten the hang of it, but it was a mistake to do something that radical for their last effort.

Through it all it seems if though the members of Zao are possibly going through some hard times, and felt the need to wrap up Zao with a last album instead of taking time to work things out. You can tell that Zao meant a lot to the members, but they didn’t really have it in them this time around.

Bottom Line: “Parade of Chaos” would be an excellent place to start for newcomers to Zao, seeing as they would be starting at the low point of Zao’s career and moving up. “Parade of Chaos” isn’t necessarily a bad one, but a disappointing effort from this talented band.