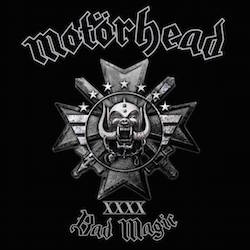 At the time of this writing, Lemmy Kilmister has been going through a serious life-transition. His body is slowing down and performances are becoming laborious and shorter. It truly is heartbreaking to see this larger-than-life musical giant becoming so fragile right before our eyes. I suppose we forget that as we age, our heroes also grow older. That said, I find it nothing less than typical that Motörhead has issued yet another strong album in Bad Magic. At nearly 70-years of age, Lemmy still provides the fans with 110% heavy metal goodness.

The Motörhead of old is gone, of course, but this lineup of Mikkey Dee and Phil Campbell is the most solid and long-lasting of any of the previous incarnations, and if it ain't broke, don't touch it! The opening track, "Victory or Die" pretty much sets the tone for the record, offering a weighty alternative to some other recent offerings by aging bands that are, for all intents and purposes, laboring through mediocrity. That thick, recognizable sound of that Rickenbacker bass still thumps out of the speakers with all of the shyness of a bowling ball down a freshly-waxed lane. I would honestly never guess that this band was at AARP status because there is no sign of Motörhead slowing down the pace, despite the aforementioned ailments Lemmy is currently handling. Everything that makes for quality metal music is found here, with a crisp guitar sound, drums that fill the bottom end with subtle perfection, and the grimy and filthy vocals that are a staple of the Motörhead sound.

The magical formula that is Motörhead's existence is pretty much the blueprint for what basic, yet memorable metal music should be. The lyrics are, as always, pretty simple in that Lemmy doesn't offer up grand compositions to get his point across, and that is what makes a song like "Electricity" so damn perfect. The vocal melody follows a poetic pentameter that he has found comfort in for many years now, much to the delight of the fans who know exactly what each new Motörhead offering entails. The punk-laden opening of "Evil Eye" screams Black Flag-meets-Lemmy-in-a-scummy-alley all the way. It's amazing to see that the influence of this band still reaches back into the swirling cauldron of rock music and pulls forth a viable, fitting compliment in each track. The fantastic part is that Mr. Kilmister still sounds as gruffly evocative and familiar as he did some 40-years ago. The fact that his vocals will never win operatic awards is certainly not lost on me, but, as I said before, if it ain't broke....

Now there are some who will argue that this all-too-familiar and simple style that Motörhead encompasses is a lack of ability to advance or unwillingness to change the sound for a more updated audience. Bad Magic follows one of the greatest rock bands to ever grace a stage into its suggested 'retirement home' phase and spits directly into the faces of the naysayers who think it's time for Lemmy to hang up the Ric for good. When I hear "Till the End" and feel that bluesy influence just fill my torso, I know exactly what Motörhead has left in the proverbial tank, and they aren't ready to call it a day just yet. So many ancient bands today, who I'll mercilessly leave nameless, refuse to recognize the magical qualities of subtle repetition and instead flood their catalogs with meaningless drivel they've since copied from the lesser imitators of the legends' own early sound. Motörhead follows no leader and pretty much never has, so what might appear as a lack of diversity in the tunes is actually, quite simply, Motörhead music. Even the cover of The Rolling Stones' "Sympathy for the Devil" is a cutting, bass-driven piece of rock 'n roll history that Motörhead makes their own for 5:35 out of your day.

You simply can't go wrong digesting Bad Magic, because everything that the band is worth is spelled out for you in yet another great addition to one hell of a long discography. I challenge you to find one solid clunker is that line if you can. By the time you're finished finding fault with maybe two or three songs from any given album, you'll have taken in this record at least twice and will no doubt be utterly amazed at the prowess that Lemmy and the boys still have after all this time.

It gives us all hope to see those stupid social media memes about Keith Richards and how he's defied death after a life of unabridged excesses and know he's got absolutely nothing on Lemmy.