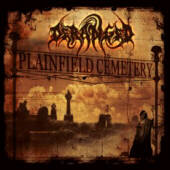 My initial impression of Deranged was something along the lines of, “damn, this is loud.” After about a dozen more listens, my initial impression is the same. The only difference is my ears have grown accustomed to Deranged’s music and I’m now able to give a more objective response to what is my first encounter with this death/grind act, “Plainfield Cemetery.”

Deranged, now with four full-length releases, has managed to stay relatively underground. The reason, I would say, is because Deranged offer too much of a swift kick in the ass for most people to handle. “Plainfield Cemetery” is without a doubt a sickening, brutal ride of cacophonous death and grind. Quite simply, these guys don’t let up one iota until the end of the album. That makes Deranged that much more limited in who is and who isn’t going to enjoy their music.

The music of Deranged, although having a strong grind-edge, is given a much more proper death metal production. That is, it actually sounds ok – you can pick out individual instruments. Underneath all the noise that these fellows create, you’ll find that Deranged is a tight group. You can actually get a feel for what Deranged are playing, instead of sitting there and pretending like you actually can hear everything that’s going on. The musicians here are obviously competent, and it really goes a long way for a band that plays such abrasive and busy music.

One thing that I did find disappointing with “Plainfield Cemetery” was the production. The drums are a bit too far back, the vocals are a bit too high, and the guitars just sound doesn’t have enough power behind them. With a proper production to boost the energy and feel of the music, Deranged would only be that much stronger.

Bottom Line: If you’re the metal fan that finds yourself going for the most intense death metal, Deranged is definitely a band that shouldn’t be looked over.