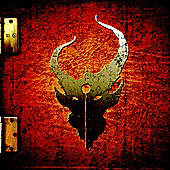 Type: Full-Length
Release Date: 2002
Label: Solid State Records
Genre: Heavy, Rock
1 Screams Of The Undead
2 I Have Seen Where It Grows
3 Infected
4 My Throat Is An Open Grave
5 Through The Black
6 Turn Your Back And Run
7 And The Sky Went Red
8 As We Wept
9 A Broken Upper Hand
10 The Gauntlet

Solid State Records have spent almost an entire year promoting the debut album of Demon Hunter, yet I’m only hearing of them now. What surprised me even more is that Demon Hunter has been at number one on the metal charts for mp3.com since their song ‘Infected’ debuted. That’s quite an accomplishment for a band that’s just beginning. However, it’s hard to find that shocking when you take into consideration Demon Hunter’s abilities.

The reason for Demon Hunter’s success is due to their ability to combine the abrasive sound of metal-core with melody. This opens the door to people who might be stuck out in the cold as far as their exposure to metal beyond the mainstream. So by now you’re probably thinking along the lines of simplicity, clichés, the band selling out before they’ve started, right? Think again, Demon Hunter carry the best of both sides.

Demon Hunter doesn’t sacrifice much when it comes to them integrating quite a bit of melody in their music. It mostly comes in from the use of clean vocals, but the guitar does help out whenever it’s not raising hell with the rhythm. Also lending a hand to the melodic nature of Demon Hunter is the harmonization found in the vocals and guitars, at times. The technique is used sparingly enough so that it holds more impact instead of falling into the claws of predictability. The rhythm, which usually takes precedent any other use of guitar, is right between complex and simple. As far as the rhythm goes, the focus isn’t on running circles around your heard, but on grabbing the listener by the ankles and taking them under with the unbelievable pull that the rhythms hold. It’s hard to hold back from any head banging; fist-pumping, or whatever it is that you do when something gets you moving.

As much as I appreciate Demon Hunter’s abilities nothing can help me from getting annoyed by some things they do. My biggest problem is that while the songs generally move along without any bumps in the road, often the endings to the songs are completely cliché, or just bad. Other than that Demon Hunter keep a pretty clean camp, besides the occasional weak riff or boring moment.

Bottom Line: Demon Hunter’s debut self-titled album is impressive and I wouldn’t be surprised if they continued to climb their way to a larger audience. As long as you’re not a metal-core elitist and can take a moment to enjoy something that’s not a full on assault, Demon Hunter is probably something you can find some enjoyment out of.