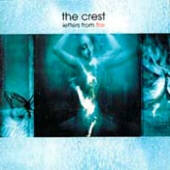 Season of Mist has a sixth sense for innovation. Being specialized in Black/ Death metal, they also count on their rank some post-metal bands like Meridian and Mezzerschmitt. But they didn't stop there. In deed, they had the gut to sign some of today's most Avant-garde bands like Atrox and Tactile Gemma fronted by the amazing singer Monika Edvardsen. Now they are stepping up again with something out of the ordinary with The Crest.

The Crest is a relatively new band formed in 1996 by Nell and Kristian. In 1999 the line-up was completed with its current five members. "Letters From Fire" is their debut album and was recorded at the famous Sound Suite Studio, the ivory tower of Tristania and The Sins Of Thy Beloved. What they are offering is a very pleasant mixture made of elements from pop, dark and gothic. The winning ingredient to spice it all up is a female singer.

As far as their pop influences, it can be felt by the time duration of the songs not lasting long and being generally in the four minutes duration time. A couple of examples of some catchy ones are ‘Fire Walk With Me’, the opener. This one has all to become a hit with its nice melody, cool guitar and key work and the singer has a nice little girl voice. ‘Frozen Garden’ can also fall into that category but I also appreciate its somewhat heavier sound, the good guitar riffs, the symphonic keys and the chorus, just like in many cases on this recording, is simply superb. By being catchy doesn't mean bad or just commercial but rather more readily accessible to a wider audience.

For the Gothic feel, ‘Thorn’ is a fine example with a calm key & guitar intro, heavy guitar riffs on a mid tempo gothic melody filled with great voices, good dramatic passage and a few little extras in the form of a psychedelic section with the vocals in the background. Another good gothic impression is ‘Monument’. The keys are symphonic, the riffs are just great and heavy and some male vocals are taking part.

For the dark side, my favorite element, 'Butterflies & Dragons', begins with key, the mood is ambient, the bass lines are strong the keys turning to symphonic and the female vocals are really sensual for a very nice melody. Then comes the strongest song on the album 'Pills For Broken Dreams'. The mood and lyrics are really dark, the voice is warm, the guitar sound just great, the keys take on a sad symphonic tone. The chorus is fantastic on this calm and ambient delight. The closing number ‘Armada’ gets to be a very somber, heavy and mysterious instrumental with changing keys from dark to spacey and finally symphonic. Add to this heavy riffs and scary sounds and you have the full pictures of the ending number. The heaviest song is called ‘In This Cage’ and it has some pretty punchy lines and again a very nice chorus with a male/female duo.

Once again, Season of Mist is presenting another refreshing band that was able to deliver a strong and pleasant debut album. The short tunes and catchiness gives it a somewhat pop touch while the lyrics are rather dark. Combine with a beautiful female voice, heavy guitar and majestic keyboard arrangements and you now have a good view of their gothic scenery.

Bottom Line: If you had a chance to listen and enjoyed Ambion’ "Fate Of A Dreamer", Antimatter' "Saviour" or Beseech' "Souls Highway", then you'll absolutely love "Letters From Fire".