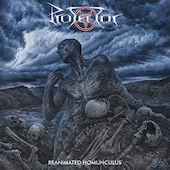 Despite massive line-up changes, I was always loyal to Protector and therefore it was no question but a matter of course for me to buy their comeback EP. In hindsight, this was not the best idea I have ever had, because three of its songs reappeared on Reanimated Homunculus. The last one, "Terra Mater", found its place slightly delayed on Cursed and Coronated. In other words, I was somewhat frustrated when I saw that 30 % of the here presented full-length were no new stuff. Even the impressive artwork was no compensation for this dubious track list. Either way, it was time to discover the whole work of the once German, now more or less completely Swedish gang.

Generally speaking, the musical direction does not differ much from the approaches of the former Teutonic line-ups. Protector still celebrate a pretty harsh form of thrash, sometimes with a tendency towards hysteria, sometimes with death metal-like vocals. Some slower sequences give the guitars room to show their muscles. "Deranged Nymphomania", for example, combines a slicing, powerful riff with double bass driven parts in a very good way. Moreover, exactly the title track relies on surprisingly dragging rhythms, if we leave the solo part out of consideration. The drilling sound of the guitars seems to be inspired by early productions such as "Finished with the Dogs". The old school flair bridges the two decades without new studio album adequately. Nevertheless, each and every song conveys a fierce atmosphere. Protector haven't returned in order to play harmless games.

Protector have always had a pretty individual sound and they were able to conserve this feature through the decades. Compared with the great names of German thrash, they sound less awkward than early Kreator, less technical than Destruction and less funny than Tankard, although they are prone to humorous closers ("Space Cake" or now "Calle Brutal", which is, by the way, not the spiritual brother of Kalle Blomqvist). Some of their songs are not too far away from Sodom. Missy's voice and Angelripper's vocals are pretty similar and "Antiman" seems to pay tribute to the riff of "Remember the Fallen". However, Protector are winding their own way through the bone-dry territories of homicidal thrash. Unlike Sodom, they are not very interested in catchy choruses and their song patterns are sometimes pretty complicated without being progressive in any way. This approach results in somewhat unclear structures ("The End"), but usually the compositions don't remain ineffective.

It is striking that the three songs of the EP belong to the highlights of this full-length and it goes without saying that this fact reduces the value of Reanimated Homunculus for every proud owner of "The Return of Thrash and Madness". Nevertheless, taken for itself, this is a good album which doesn't suffer from a lack of spirit or robustness. Unfortunately, we all know that many other formations have failed when it came to a worthy comeback. But Protector have recorded a couple of strong tracks and a small number of average pieces which are presented in a somehow mean and hurting sound. Liner notes to every song and a short band history in the booklet prove evidence that some people have worked on this output passionately. Maybe you like to lend it an ear, although the highlight of their back catalogue, the furious "A Shedding of Skin", is not at risk to lose its pole position.