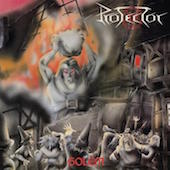 Wolfsburg is among the few German cities that I would describe as ugly and repulsive. It seemed therefore only logical that one of the harshest Teutonic bands originated from this unattractive area. Protector mixed elements of thrash, death and black metal in a skillful way without taking care of genre limitations. This applied to the musical approach, but also to the lyrical mishmash. On the one hand, 'Delirium Tremens' and 'Germanophobe' dealt with socially critical or political issues. On the other hand, songs such as 'Apocalyptic Revelations' offered typical black metal lyrics. In any case, the band released two outstanding full lengths during the first phase of its activities. Golem, which is named after a figure from a Jewish legend, is one of them. Although the group did not leave the musical path of the previous EP, Golem constituted a quantum leap. The harsh songs were very well received due to their massiveness and sophistication, while the EP had not been able to conceal the fact that it was just a first step into business.

The song material was still fast and furious. But despite these rather chaotic compositions, Protector were able to deliver coherent tracks. They kept an eye on brutality without neglecting characteristic and memorable riffs. While commuting restlessly between mid-tempo and high velocity, the songs offered slightly melodic parts as well as pure musical anarchy. The dark lead vocals were partly supported by gang shouts so that even an element of hardcore was included. With regard to the stylistic diversity, the last track was literally the icing on the cake. 'Space Cake' did not only present a duet with Tom Angelripper, it also appeared as an ugly bastard of punk and grindcore. To summarize, the heterogeneous album surprised with a very unusual yet attractive mixture. By the way, this mixture was equipped with a sound that was anything but bad. The howling guitars marked its most outstanding feature.

The band had written some crashing songs that enriched the German underground. You find the highlights at the beginning of the album. My personal favorite is the devastating 'Apocalyptic Revelations', because of its dark atmosphere, the thrilling main riff and the well-executed breaks that lead to dynamic tempo changes. But fortunately, Protector did not deliver any throwaway tracks and I still enjoy listening to each and every song. One got the impression that the band identified completely with their music. Perhaps this was the main reason why the quality of the ten pieces was more or less consistently high. Therefore, if you are interested in the extreme variation of German metal of the eighties, you should give this album a chance. It is no classic in the narrower sense, but due to its unbridled aggression you will have a good time while listening to it.