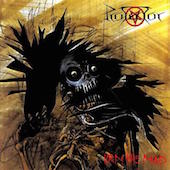 It is more then 28 years ago that Urm The Mad was published. Ridiculously short period, isn't it? Erich Honecker, the General Secretary of the decaying GDR, mumbled socialistic slogans and the Berlin Wall was still standing strong, but the Protector dudes, who hailed from the so-called Zonenrandgebiet ("zonal border area") of West Germany displayed some signs of weakness. Their second full-length had some elements of Sodom's coarse early works, but it did not fully meet my expectations. Its sound was slightly blurred, dull and lacked pressure, not dramatically, but to a certain extent. However, the compositional shortcomings marked the main problem.

This is not to say that Urm The Mad is completely devoid of good songs. 'Capitascism' (lame pun) rages against right-wing splinter parties while offering a solid, cleverly constructed opener. 'Nothing Has Changed' might have been the initial impulse for the foundation of Asphyx, because it mixes a doomy approach with a deadly attitude. But please wait a moment...

...the mention of Asphyx forced me to listen to one of their killer tracks ("It Came From the Sky"). But now I am back, 'Nothing Has Changed' was the topic. Its dragging riffs hate agility and flexibility while showing a surprising tendency towards catchiness. The ponderous growling and the almost melancholic solo accompany the socio-critical lyrics. They are pretty simple, but by far not as bad as those of 'Sliced, Hacked And Grinded'. In alignment with the smooth title, they deal with "grinded genitals", a "comminuted corpse" and further delicacies. Very edifying. Honestly speaking, I will never share the fascination for this kind of lyrics. Anyway, the composition itself belongs to the best tracks here, because it has exciting lines and grows constantly. Rapid sections and less speedy rhythms form a powerful piece whose penetrating power is not affected by chaotic elements. Unfortunately, these elements show up in many other songs and this is not for the benefit of the album. The pretty incoherent closer of the A side marks the turning point.

The entire second half offers dark, brute metal which suffers from the lack of outstanding or at least memorable sections. Aggravating this situation, Missy's pretty monotonous voice fails to push the songs on a higher level. Do not get me wrong, the tunes have a certain substance, but you will have a tough job in order to find a retro thrash party where they play these numbers. Inter alia due to the absence of any form of atmosphere, they cannot compete with the crushers of Golem. One does not find a new 'Delirium Tremens' with its sharply cutting riffs, the ominous aura of songs like 'Apocalyptic Revelations' or 'Golem' remains unrivalled and so on. Thus, if one just needs deep growls and the sound of electric guitars itself, Urm The Mad is not a bad album. Everybody with higher demands will not find a new highlight for her or his collection. Anyway, it is comforting to know that today Protector is still a force to be reckoned with. But the best is that this cannot be said about the inhuman, brutal and ideologically pigheaded GDR.