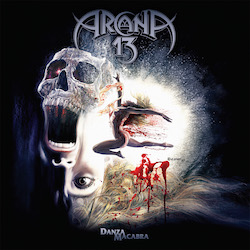 When I first saw the artwork for Arcana 13's debut Danza Macabra, I thought it looked familiar. Not this particular piece but the style. It reminded me of poster for a Dario Argento film. After reading the press kit, I see it was for good reason. Legendary movie poster artist Enzo Sciotti, who has done posters for Argento, Fulci and David Lynch to name a few, lends his talents for this awesome cover. However, I'm supposed to be reviewing the music not the cover. At the same time, cover art has always been important to me. It can, and should, add to the overall experience of the album.

On to the music. These Italians play traditional doom metal, drenched in 70's hard rock, using horror themes to strengthen their overall atmosphere. They draw similarities to several bands, most notable would be Blood Farmers. Danza Macabra, like Blood Farmers brilliant Headless Eyes, is as much influenced by Goblin as it is Black Sabbath. In fact, Arcana 13 provide a rendition of fellow countrymen Goblin's classic "Suspiria" from the Dario Argento film of the same title. All the pieces are falling into place now.

Album opener "Dread Ritual" is pure traditional doom with a fuzzy hefty guitar tone. The vocals are similar to Magnus Pelander of Witchcraft, another one of those bands they fit in with. Although the first two tracks are good, the third song "Land of Revenge" is the first to really stand out. It has a Ghost-esque vibe to it, with a little more of an occult rock feel. It only gets stronger after that with "Oblivion Mushroom". It's soft psychedelic beginning gives way to fuzzed out chugging guitars, wailing vocals and a thunderous rhythm section whose intention has to be to cave in your skull. As for the "Suspiria" cover, they do good at making it their own. This always worries me when bands cover songs, but they make it a much different song while keeping the original idea firmly intact. Closer "Hell Behind You" is another of the more memorable songs on the album. It has some of the best riffs of the 8 tracks.

Arcana 13 put forth a strong effort on Danza Macabra and it results in a very good debut. It's not without it's hiccups, but overall it's a solid record with a few amazing songs, that more than make up for the weaker moments.