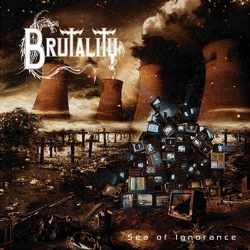 Ever since Brutality’s music fell on my ears I’ve been a fan. I consider them one of the most original bands in death metal and listened to their albums quite often over the years. Last year I had the pleasure of being pummeled by those guys live and to this day I smile when think about it because their show ruled that night and I had the chance to see them play. Another reason was finding out about new album being in the works and possibly coming out in 2016. I was stoked, excited and waited patiently. Sea Of Ignorance is the name of it, it was out on Jan 22 2016 and I’ve already stopped counting the times I’ve listened to it.

Album starts with the title track and from the very first riff sets the tone for the album. Fast, brutal and packed with energy, it feels like a quick and viciously premeditated kick to the face. Most of the songs on the album could be described in such manner to be honest with you but there is way more going on. I always remembered Brutality for the fact that none of the songs are alike and for keeping me entertained from the first note to the last. Such is the case with this album. When listening to guitar I find so many riffs that stick with me and I can differentiate songs very easy just by that. Listening to guitar work as a whole is enough to keep occupied for a long while and then once you add all subtle melodies and themes here and there, expressive or maybe even touching solos, it’s almost impossible not to go back to listen to it again. Jay Fernandez, ladies and gents, outstanding(!), but his riffs are just a part of this machine and big crushing gears wouldn’t do much damage without a rumble of Jeff Acres bass, Ruston Grosse’s drumming and Scott Reigel vocals. Bass sound on this gem is meaty and drips with juice, positioned up front when need calls for bellow and staying in the background to keep the rumble; it ads tremendous amount of force to power up this monster. Ruston’s drumming is as far away from your regular rhythm keeping as possible and at some point word maniacal went through my mind. Not sure if he will continue as a full time member of Brutality but what he’s done on this album is exceptional. Scott has been taking vocal duties in Brutality ever since I remember, and let me just say over here that the manner that he sings with and sound of his growl is the one I used to measure other vocalists to. Not many growlers out there have such deep sounding roar and can still be intelligible throughout the song, even the whole album, and that is something that to me enhances listening experience quite a bit. Another reason would be the lyrics, even though oscillating around death, are written with lots of wit and insist on digging through the subject a little deeper.

I could continue my praise for much longer here but it is not my intention to bore you death and take away all the secrets that this album possesses. Brutality is back and Sea Of Ignorance is out there and ready to be discovered. Get the album, listen to the music and bark BRUTALITY IS BACK!!!! just like the rest of us.