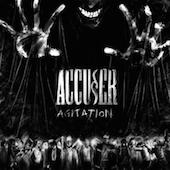 15 years after Taken by the Throat, Accu§er surfaced again. At first I was pretty happy. In my humble opinion, a band with such an energetic and good debut deserved a better farewell work than the truly weak aforementioned album. Tough luck, because Agitation walked on completely different paths than their best release from the year 1987.

Accu§er perform a pretty brutal form of thrash with hardcore influences from bands like Biohazard on drugs. (Please forgive me to be no expert in terms of crossover / hardcore…) This bastard style is not their core competence and so broad parts of Agitation remain flat and make me almost depressive. I am absolutely no fan of progressive thrash, but a modicum of technical refinement instead of brutality as an end in itself would have been fine here. The vocals of Frank Thoms lack charisma and his one-dimensional approach fails to make the songs better. Fortunately, most of them have more to offer than the lousy 'Century of the Fall' with its inadequately squeaking guitars. Okay, the title track itself is only a tired guitar intermezzo and its right of existence remains dubious, but some tracks help the album to keep the head above water.

The opener dishes up relatively lively riffs and the constantly rasping guitars form a solid neckbreaker. The overflowing guitar line of 'King of South' lends the song an individual feature and the sharp-edged riffing of the vehement 'Prophecies' has an impact as well. The band has not forgotten how to forge a fine piece of iron, but their affinity for overly modern sounds is definitely a handicap. Another one is their occasional weakness for experiments. The more or less controlled 'Strength for All' actually had the potential to mark the final highlight, although Thoms’ raw screaming sounds like the voice of an alcoholic who cries out for another beer. But a suddenly occurring acoustic part destroys the powerful fundament of the song. Adding insult to injury, the remaining songs suffer from a certain number of parts which are going nowhere. Thus, many sections of Agitation meander on an expressionless level and the solid yet interchangeable production is also not able to collect bonus points.

Accu§er did not wilt on their comeback, that’s for sure. But they were not able to channel the sheer power in the best way. To listen to average songs like the closer is no waste of time, but it’s also not the best thing a metalhead can do. Be that as it may, in contrast to some other veterans who returned, Accu§er have proven their stamina. Their self-titled album that will be released very soon is their sixth full-length after the break. Respect.