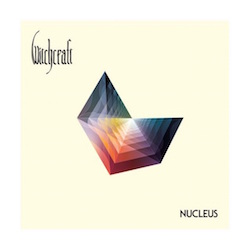 There are only few musicians which I trust almost limitlessly, and one of them is certainly Witchcraft’s commander Magnus Pelander.

Pelander, like a rock Midas turns any next Witchcraft album into gold. He does not hurry with the new albums, records only when he has something to say and still maintains an equally very high quality level, unattainable for most other bands in this style. Work-related accidents don’t happen to him, he doesn’t care about ‘best of ‘charts, and he doesn’t care to make an impression as if he wanted to be popular or if he wanted to conquer the world. He does what he wants and the best proof of it is the fifth album in the discography of the band called Nucleus, which strengthens the position of Witchcraft among the elite of classic rock bands.

Today’s Witchcraft is actually a solo, at the same time rather enigmatic, hibernating for quite long months Pelanders project. There are no musicians in the bands line up with which Magnus started the band with sixteen years ago, there isn’t even one of the companions recording the previous album Legend. The leader is responsible for all the music, lyrics and the idea for the graphic layout, he sings, he recorded all the guitar parts and most of the keys, he even reached for the vibraphone. He invited bassist and drummer, and several guests to participate in the production and to be responsible for backing vocals, flute, violin, but other than that his domination is absolute. Taking into account the quality of work of Witchcraft, this confirms, moreover, solidly proven theory that democracy does not necessarily works in the music industry. The boss determines the creative direction, drinks the cream of the crop but is however also responsible for possible failure.

The latter fortunately, Pelander does not have to worry about (hopefully as long as possible), though with the Nucleus the band does not live off coupons; they’ve ventured a little, offering probably the least approachable, and paradoxically the most atmospheric album in his career so far. There are more references to folk here, moreover, this is the way the album begins, or with folk passed through the filter in the style of a rock band Jethro Tull (cool parts of the flute). But what we have here is even more of that quiet minimalism - like in ‘Helpless’, ‘Nucleus’ or in the first part of closing the album, traditionally the longest, 16-minute colossus ‘Breakdown’. There were no similar solutions on such scale in Witchcraft’s artistry before.

Swedes have done something like that already on the occasion of recording the Legend, while retaining all the features typical of their style, but at the same time being a bit more advanced sound-wise, dismissing the band from - in the long run stigmatizing – ‘retro’ pigeon hole. Nucleus is not a new opening and leaves no doubt that this is pure bred material of Witchcraft, though not duplicating ideas from Legend or earlier release, the brilliant The Alchemist, which to this day is recognized by many fans as the bands opus magnum. Vocals, guitar parts or one-of-a-kind melody lines are impossible to repeat and very characteristic of the Swedes, while at the same the album requires the listener, probably for the first time, to digest it a little bit longer and allow the peaceful atmosphere of the album to saturate uninterrupted.


Initially, it may seem that something doesn't jive here. The melodies are not as obvious, at moments Pelanders hysterical vocalizing is surprising at best, there is much less ‘song’ qualities here, pieces are longer and multi-threaded, and it’s hard to talk about particularly distinctive compositions. More so, with selection of the very safe first single 'The Outcast', based on the catchy, trademark, melodic line, Pelander definitely does not reveal all the cards from the Nucleus deck. I also do not want these cards unveiled, because such emotional and beautiful music does not easily surrender to any reviewer’s analysis. Not to mention, that when Nucleus finally clicks, it totally makes the listener devoted. It's a wonderful album from remarkable band, and everyone should discover it on their own.

I first became aware of Witchcraft with Legend. Not only did I fall in love with this band but Legend was my top album of 2012. I went on to explore the rest of the back catalog, The Alchemist being the best of the first 3. However there is a huge jump from The Alchemist to Legend. I didn't expect that type of difference and growth here, in fact I didn't know what to expect. I certainly didn't expect a heavier and doomier ( it's a word because I say so) Witchcraft, but that's exactly what I got.

Nucleus is the fifth full-length from the Swedish masters of the hook. Magnus Pelander has done it once again, this time going for a heavier and darker sound than on any of the previous albums. Opening track "Malstroem" sets the tone, making the listener aware from the start to drop all preconceived notions of this band. It's slow doom anthem that builds and Magnus provides desperate vocals, all while maintaining the sense of melody you've become accustomed to from Witchcraft.

There are still a few of the bluesy more upbeat tracks, "The Outcast" being one of them. It's ultra catchy guitar riff alongside Magnus's unique vocals and incredible sense of melody rule the day here. This is a definite head-bobber and I can see why this was chosen as a single. It's as if Magnus is going back to his roots, drawing obvious inspiration from Sabbath and Pentagram, while exercising a more modern approach sound wise, like was done on Legend. As always there are unexpected twists and turns. Aside from the obvious influences, a little bit of everything can be heard on here, from doom to blues to jazz. Yet it's wrapped up nice and tight in the Witchcraft blanket. This is certainly part of the appeal to those of us who adore this band.

Again this is a new line up and also just a 3 piece. This probably had a lot to do with the directional shift. Magnus plays all the guitars on this album and does it quite well as usual. The riffs are brilliant, the solos are there and all this with his tremendous vocals. This band has always had issues in maintaining a steady lineup but through it all Magnus has continued to find great musicians to help him complete his vision. It's no different on Nucleus, both Tobias Anger (bass) and Rage Widerberg (drums) do a perfect job as the heart and lungs to Magnus's brain by pumping energy and breathing life into each of the 9 tracks.

What's really interesting with this release, at the height of their popularity and with a large amount of promotion, they made their least accessible album. Atmospherically, Nucleus is the darkest and gloomiest album Witchcraft has done. Most of the songs are more doom oriented and not the ultra catchy riffs that we are accustom to. That's not to say they're not good, just different. The songs are also longer over all with a couple tracking in over 14 minutes. One of those is the brilliant title track. This slow burner begins soft and grows into something of epic proportions. As it builds and moves towards it's forbidding end, eerie vocals accompany a haunting melody in what might possibly be the best 6 minutes in the band's history. The other of these is the 16 minute "Breakdown". After the creepy intro and a sample this song turns. It's heavy and repetitive, with some very interesting vocals from Magnus. This should be the album closer, but they stick "Chasing Rainbows", a pretty mediocre bonus track, at the end of an already long album.

Over 5 albums Witchcraft has never given us the same thing twice, over the last 2 they've been absolutely brilliant. It's still very early in 2016, but I have a feeling when all is said in done, Nucleus will be at or near the top of the list. Witchcraft remains a step ahead of their peers and Nucleus is a testament to the brilliant artistic vision of Magnus Pelander. I also see this as a one time deal, it seems as though Magnus had some dark shit he'd been living with and needed to get out. I expect a little more of what we're used to in the future. That being said, Nucleus is a necessary release. It may not be as immediate as past efforts, but well worth letting it bore it's way into your brain where it can grow over time.