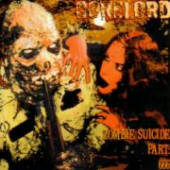 Gorelord is some kind of a horror movie turned into music. Seeing its roots in 1999, the monster created by Norwegian composer Frediablo (Necrophagia, Wurdulak, Deride) was for him a way to express his passion for these type of movies. Now he's back with his second effort. The first album was called "Force Fed on Human Flesh", casting Jehmod (Bloodthorn, Wurdulak, Perished) on drums. Work is already being undertaken for his third release that will be called "Norwegian Chain Saw Massacre" which will be an homage to his favorite movie: Texas Chainsaw Massacre.

Just have a look at the cover art to see what type of music we are dealing with. The artist responsible for this horrifying sight is Patrick Tremblay. The lyrics are not included in the booklet because they were apparently too depraved... This is what Frediablo had to say regarding this: "I couldn't believe my fucking ears when Killjoy told me this. I started laughing, cause in my mind, I feel the lyrics on "Force Fed on Human Flesh" are far worse than on "Zombie Suicide Part 666". I must admit that I like it though, cause I get that urge to push it even further the next time, and it makes me wanna write some really fucked up shit just to piss these fucking censorship fucking faggots off big time!!".

Now to the music. Well, it goes with all the rest. A very good presentation of Death Metal with an industrial type of beat, I would say. Old school metal that ends up in more post Death are the way the songs are built in many cases. Thrown in the middle of all this bloody stuff, is a very nice melodic instrumental with electric guitar and pleasant echoing notes called 'Outback'. Kind of strange, but an enjoyable break, nonetheless. The song structures are not all made of hardness only. Of course you get the lethal dose of classic elements such as precise hammering double bass drums, solid bass, great guitar riffs and scary vocals. But there's more good stuff involved. Different vocals are used, some with effects, some spoken words, some screams, different tonalities are used to give it a theatrical feel like in songs called 'Screams Choked to Silence' and 'Shrieks of the Undead'. The last one is the closest thing I heard to Zombie voices, very well done! Slower parts give a certain spooky and doom atmosphere to these compositions 'Screams Choked to Silence', 'Dreams of the Macabre', 'Horror Gore & Unreligion' and 'Four Ways to Heaven One Way to Hell'. The only bad thing is regarding the last two tracks (demo). The sound is very low but they still remain in the same line and have pretty gory tittles.

Bottom Line: "Zombie Suicide Part : 666" will definitely please all hardcore fans but also the post movement adorers. Not to forget the ones who liked the latest Necrophobic, Wurdulak, Malevolent Creation and Internecine.