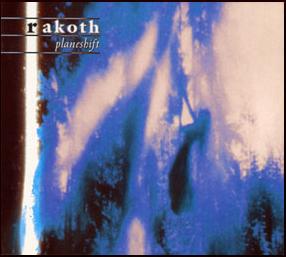 I really don’t know quite where to begin with Rakoth. “Planeshift” is certainly a decent album with some good moments at times, but also it is a mediocre record with some, well, mediocre moments.

Largely playing folk black metal inspired by the works of author J.R.R. Tolkien, Rakoth go about forging their craft in some weird ways. Musically this record is pretty solid, but Rakoth just barely miss the mark with “Planeshift”. The vocalist is at times somewhat difficult to listen to. His black metal rasp is fine, but the clean vocals are strained and it becomes more or less a struggle for me to listen to his crooning throughout 50 odd minutes. The biggest problem for “Planeshift” lies in the fact that Rakoth are either too tepid or too bombastic with their material, never a happy medium. One section may be comprised of some beautiful keyboards and then it will radically jump to another section that keeps the keyboards intact whilst layering it with drums and hard guitar riffs; it destroys the mood the keyboards had working at the start.

While there are certainly some issues that need resolving here, Rakoth has a great musical concept happening and seem to be brimming with musical creativity and ideas. This is a fantastic thing and hopefully a refinement of “Planeshift” should see them only improve in the future.

Bottom Line: A bit of a fuzzy record. “Planeshift” suffers from some fantastic ideas not quite be correctly implemented. Rakoth has got some sound creativity working for them, they just need to find the correct musical equation to exploit it.