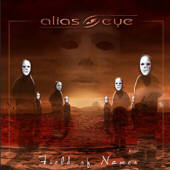 After their demo album in 2000 titled “Beyond The Mirror,” Germany’s Alias Eye hooked up with Dutch label DVS Records and is now releasing their debut, “Field Of Names”. “Field Of Names” is a wild ride through a multitude of influences and sounds, and when combined with Alias Eye’s ability to execute and write good songs, it results in Alias Eye being one of the few modern day progressive rock acts that are still credible.

Alias Eye’s sound is comprised of many things, including but not limited to classical, jazz, classic rock, pop, and metal. The guitars range from chord progressions to riffs to smooth solos, and you can pretty much always count on them doing something small in the background, to add to the depth of the piece. “Field Of Names” is drenched in tasteful piano, ranging from soothing melodies to backing chord progressions, or even a few solo runs. Other instruments such as the accordion or saxophone are thrown into the mix for variety, always ending up stylish. Vocalist Philip Griffith also plays as large a role in the music as the instruments do. His clean vocals sound fantastic, and the melodies he does are what make the choruses so catchy and memorable.

The pieces of music tend to be very open and transparent. That is, you never feel like you’re about to be squashed by a section that is cluttered with notes, and there aren’t any sections that are balls-to-the-wall heavy. In fact, most of the time Alias Eye tend to keep things rather mellow. However, it’s far from a dull ride of un-dynamic passages that all feel the same. It’s quite the opposite, actually. “Field Of Names” is full of dynamics and various emotions.

With all of the influences, the awesome musicianship, and the progressive tag tied onto them, it’s a good thing that Alias Eye manage not to sound pretentious in their compositions. They never lose sight of the song, nor do they go on any self-indulgent tangents.

Bottom Line: Alias Eye is only at their debut now, yet they hold so much power already. As time goes on I can only see Alias Eye improving. For now everybody will just have to enjoy the great piece of work that is “Field Of Names”.