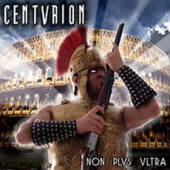 Most bands have something – whether it is a guitar player, the drummer, the lack of emotion, atmosphere, etc. – that holds them back from being good, if not great. For Italy’s Centurion, the problem is their vocalist. While their third album “Non Plus Ultra” is a good piece of work underneath, nothing can stop their vocalist from making this reviewer’s ears cringe, or just burst out loud laughing.

Instrumentally, Centurion is a very strong band. Their power and thrash brew turns out tasting quite well. Rhythmically, Centurion is quite competent. Drummer Emanuele Beccaece is a precision drummer and he’s never off of a beat. The rhythms hold that necessary supremacy that power and thrash metal demand. The lead guitar is usually very solid. The melodies tend to be good, the solos are well executed, and it’s all technically pleasing. As a band Centurion (excluding vocalist Germano Quintaba) do a good job of playing with emotion, or at least writing material that has some feeling. Every song on “Non Plus Ultra” has a good, strong feel to it and in that aspect, it doesn’t disappoint.

There is that dreaded vocalist – the guy who can make or break a band for some people – which Centurion was so unfortunately imprisoned with. Germano Quintaba sounds like a he’s one part Warrel Dane, two parts James LaBrie, and one part sore throat. Most of the vocals are layered with a few different styles. Some of it’s yelling, some of it’s a slightly cleaner version, and the other is Quintaba’s eardrum rattling and alarm clock-esque vocals. First off, the vocals are just completely cheesy. There will be times when you ask yourself if this guy is serious, I kid you not. The rest of time you have to put up with Quintaba’s horrible vibrato and his terrible intonation.

Bottom Line: Do check out Centurion for the music, because their vocalist might not bother you as much as he did me, and the music itself is very well done.