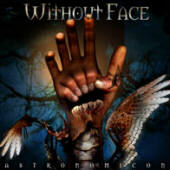 Lee Barret, founder of Candlelight Records and now Elitist Records (an imprint of Earache), has a knack for finding excellent bands. It’s either that or I’m predisposed to liking those bands that show a bit of uniqueness and creativity. Hungary’s Without Face is one of the bands that he’s signed to Elitist Records, and after getting down to the bottom of their Elitist debut “Astronomicon,” I must commend the man once again.

Without Face isn’t amazing, but honestly, they could be. Let me get out of the way what the problem is. Without Face has some amazing ideas all over this album, but there are a few shortcomings. The root of the problem is that Without Face manages to conjure up these mammoth, lengthy progressive songs, and then after that they realize that they’ve bitten off more than they can chew. The songs lose focus, direction, and power. If you’re absolutely not in the mood for something like this, getting into and through “Astronomicon” can be quite a challenge. At times I feel that Without Face try a little to hard to write their songs, making some of the ideas sound forced. That’s where most of the problems end for Without Face.

With those problems aside, Without Face is a very promising act. “Astronomicon” is six lengthy songs with a million excellent ideas. This is the kind of stuff that wraps itself around your head the minute you hear the first note of the song on those repeated listens. Best off all, Without Face’s ideas are actually creative. Sure, you may hear some influences from other progressive rock/metal bands, but nothing really sounds exactly like something else. Without Face has been able to carve a small niche of their own in the progressive field of music. Instrumentally Without Face doesn’t disappoint either. Each member is highly skilled, including the vocals, both male and female. While male vocalist András isn’t my first pick when it comes to clean singing vocalists, he’s competent enough. Female vocalist Julie does a more superb job, stealing the show from András. However, both of them manage to share the spotlight well, if not both utilizing it at times. Keyboardist/pianist Sasza also plays a large role in Without Face’s sound, both crafting the atmosphere and putting out some great melodies.

Bottom Line: With another album or two, I’d say Without Face could be a band that will be hard to top. “Astronomicon” already beats out most of the progressive music that came out this year, and Without Face show enough talent to acquire my confidence in them.