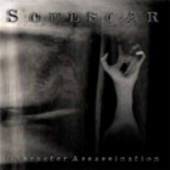 Every time I say that melodic death metal has nothing else to offer, a band like Soulscar comes out and makes me eat those very words. It is not the fact that these guys are doing anything too different, because to be quite honestly, they are not. However, Soulscar do show a hell of a lot of style on their debut album ”Character Assassin” that can only serve well in their progression on future releases.

Soulscar consists of two full-fledged members, Andrew Staehling and Brent Mackenzie, with the others listed as supporting players. Staehling handles guitar, vocals, and keyboards while Mackenzie takes care of bass and extra vocals. They play fairly straightforward melodic metal. At times it strays away from the melodic death style to venture into more traditional metal territory, which was refreshing to hear. The only complaints I have here are with the vocals. They almost sound like whispered screams if there is such a thing. After all this time of listening to this CD, I still have not gotten fully used to them; therefore, I hope next time around they concentrate more on that aspect.

Without a doubt the standout track on “Character Assassin” is ‘Sacrifices.’ I suggest that Soulscar explore the clean vocals on this song a bit more in the future as they really add a whole new dynamic to their sound. The atmospheric guitar leads evident on the song would also be another interesting thing to see the group expand upon. Throughout the CD you notice little things like this. They even stick in the occasional Viking-inspired leads, which really stick out on “Character Assassin” and make it more interesting to listen to. Little things like this could really work to set Soulscar apart from their contemporaries if continued to expand upon.

If you are into melodic metal then I would suggest you keep a close eye on Soulscar. They have the uncanny ability to go from melodic to traditional to thrash and back again and still keep their style intact. This style, however, is still in the teenage stage and showing some growing pains yet that is only natural. These guys just may blow me away with their next disc if they choose to expand and concentrate on certain aspects listed above. Only time will tell!

Bottom Line: A modest introduction for the band. Give them a shot. I see good things for the future!