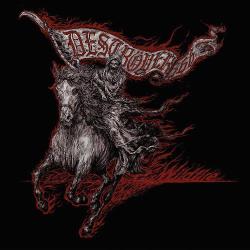 Deströyer 666 are back. The alarming news is that only band leader KK survived. A completely new line-up supports him. But stay calm. The personnel changes do not cause any damage. Deströyer 666 have forged a pact with the God of vicious metal and with their fans as well. The fundamental orientation has not changed. A mix of black, thrash and mega-intensive heavy metal sends its shockwaves while benefitting from a dense, vehement and pugnacious production. Despite the long period of silence since the publication of the last regular studio album, the horde has nothing loss of its force. The band believes in toughness, intensity and robustness. Aside from this, the musicians have the capability to vary their approach in order to deliver a suspenseful album. However, one element is omnipresent. The malignant, beastly aura ensures the homogeneous appearance of Wildfire.

The band has created a handful of brilliant compositions. From my narrow-minded point of view, the strongest songs are naturally those where the dudes act as if there were no tomorrow. The title track and the opener taste like the most effective energy drink which is amplified by almost unhealthy flavor enhancer. These songs rely on truculent fundaments of pure heaviness and flattening riffs, while guitar eruptions contribute another facet of insanity. It may sound pretty trite, but Deströyer 666 spit on any form of compromise. Attack is the best defense and the four-piece embodies this motto in a very credible manner. The purity, the stubbornness and the f**k-off-attitude of their approach set my pulse racing. The two aforementioned thrash metal thunderstorms underline the exceptional position of the Australian legend. The guys can be very intransigent, but they always avoid drifting into pure noise. No doubt, KK controls the chaos.

Yet there are more soon-to-be-classics to discover. "Live and Burn", kicked off by belligerent riffs, is another rough diamond. Needless to mention that it also offers an impenetrable jungle of guitars which creates an intensive listening experience. However, the song has another outstanding feature. The rather mid-paced number scores with its triumphant, almost catchy chorus. Speaking of mid-paced pieces, I must also mention the fantastic "White Line Fever". It proves that Deströyer 666 do not lack of musicality. No need to panic, this does not mean that they present softened melodies. They rather combine thrilling melodies with their typical harshness. Almost fragile leads show up occasionally. They are accompanied by the extravagant performance of drummer Perracide who contributes well-accentuated drum rolls and KK adds fairly melodic vocal lines. To avoid misunderstandings: he is able to manage this surprisingly harmonic tones. It is therefore no problem that he rarely uses his voice in a pretty melodic way. But do not confuse his mighty "ooohooohooohooo" with the approach of these trendy Vikings that have long beards instead of long ships and play electric guitars instead of folkloric instruments.

The four described pieces and the equally impressive, almost epic "Hounds at Ya Back" form the spearhead of an album that reflects pure fanaticism. I do not want to disguise the fact that a very small number of songs fails to reach the highest level of quality. Anyway, the overall picture is highly fascinating. The authenticity of the band leader and his henchmen ennobles even the slightly weaker tracks. Instead of thinking about the profitability of their music, the members of the gang are focused on the creation of pure metal. Small restriction: solely for commercial reasons, the "deluxe digibox" offers a bonus track. Regardless of the fact that this piece lasts only three minutes, it is not surprising that "Deathblow" did not find a place on the regular edition of the album. It is neither a letdown nor a highlight, a solid track. But its most important function for the band - or its management - is obviously that it serves as a unique selling point for the digibox. Is this approach compatible with the often praised "values of metal"? You decide. However, with regard to the non-excessive playtime of the regular album, they should have add this song on every edition of Wildfire. Anyway, there is no need to over-dramatize this point; Deströyer 666 have composed a very intriguing fifth full-length. It cannot be described as groundbreaking, but it cements the well-deserved reputation of the band.

Destroyer 666 perform a fast and aggressive combination of black and thrash metal. It is very vivid and harsh in its nature. The guitar riff attack is quite prominent in this release and shines through. It’s these riffs that form the backbone of the music Destroyer 666 plays.

The music is rough and tough and this leads to a distinctive sound compared to say, Immortal. That music is icier and less destructive in nature. The comparison bodes well for the band because they add the thrash aspects to their music with much vehemence. This music has a repetitive feel that is similar to that genre, but keeps the black metal portions shining through. The title “Wildfire” is very appropriate for the style of music here because it has a fiery nature. This leads to the harsh aspect that is more prominent than in Immortal’s work. There is a particularly raw sound to the band that would have a very strong aura within the early thrash recordings. This thrash style has a large legacy and it’s something that Destroyer 666 capitalizes upon. There are numerous small tidbits that point to early Slayer material as there are with the comparisons to Immortal. The nature of having thrash and black metal in equal measures is something that is almost a pioneering vision for this band. They are adept at mixing the two genres and this resonates strongly in the music.

Still, there is something holding this back from being stellar. Maybe it’s the fact that it sounds a bit too standard without enough innovative directions taken. This is something that could be alleviated on future recordings from this band. Though sounding typical, the music still sounds well done and performed, however. Wildfire is something that thrash and black metal fans need to check out, but not so much from fans beyond those genres.