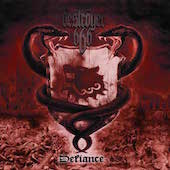 Type: Full-Length
Release Date: June 22nd, 2009
Label: Season Of Mist
Genre: Black, Thrash
1 Weapons Of Conquest
2 I Am Not Deceived
3 Blood For Blood
4 The Barricades Are Breaking
5 A Stand Defiant
6 A Path To Conflict
7 A Thousand Plagues
8 Human All Too Human
9 A Sermon To The Dead
MetalBite on YouTube

I guess it cannot be seriously questioned that the Australian underground has spit out some infamous creatures with a well-developed tendency for really vile music. Assaulter, Denouncement Pyre, Razor of Occam or, of course, Deströyer 666 have proved their ability to forge extremely intensive albums. The mixture of black, thrash and pure heavy metal shows all ingredients which are required for the creation of a special listening experience. Defiance is another album that leaves the listener with no realistic chance to escape. The holistic approach of the filthy horde leads to a monumental appearance, but it would be deceptive to think that this album's exclusive feature is absolute vehemence. This seems to be the case, but the solution of the riddle is only the density and intensity of the work. These dominant characteristics ensure that even less violent, mid-paced tunes have the might of unchained natural forces. They sound almost symphonic, but, of course, do not even think of bands like Dimmu Borgir in this context.

Deströyer 666 can rely on the capabilities of the single band members. The guitars are the driving force of the songs and their insistence ennobles even slightly less strong tracks like "Blood for Blood". Lead singer KK is also not lazy. His performance is built on authenticity and disgust, integrity and contempt. He kisses each and every word in order to leave his foul stench and the lyrics paint unholy pictures while using only the darkest colors. The effect is that the listener is confronted with apocalyptic, oppressive scenarios that fit the musical approach perfectly. KK's voice is neither extremely distorted nor overly brute, but the guy is able to impress with his beastly aura in a sustainable manner. Even totally vulgar lines like "F**k them all - each and every one" become a feast for the ears in view of his diabolic dedication.

By the way, this aesthetic poetry is taken from one of the most awe-inspiring pieces. "A Thousand Plagues" thrives on the combination of massive guitars and accentuated tempo changes. While adding alarming elements, freely flying guitar lines or solos break through the wall of sound every now and then. Of course, the malignant beast behind the microphone growls steadily and conjuring background vocals are contributed by its nasty supporters. Despite some fast rhythms, the song does not overrun the unprepared listener with sheer velocity. Its refined heaviness is the detail that marks the most outstanding feature. The heavyweight approach leaves its mark in the best possible way. "I Am Not Deceived" is also applying for the overdue exhibition "The Most Brilliant Black Thrashers Of All Times". More aggressive than the aforementioned song, Deströyer 666 celebrate their passion for destruction. I have to come back to the previously mentioned metaphor of natural forces. The song breaks loose like an unexpected hurricane - who will be able to withstand its power? The band sows the seeds of hate and the storm, that the Australians create, carries these seeds to all corners of the world. A devastating number, merciless, torrid and relentless.

It goes without saying that the album would have no effect without a suitable production. With regard to my positive statements so far, it comes a s no surprise: the output definitely offers a sound which does not lack of pressure, power and purity. To explain the last term, I am not talking of an overly transparent appearance. The mix of Defiance combines the dirty shabbiness of the sub-genre with the brutal violence of musical felons. Nevertheless, or precisely because of this, the mix embodies the pristine spirit of extreme metal. In this sense, it is hopefully allowed to speak of a pure sound. Therefore, the production is convincing, the song material exceeds the expectations (no fillers show up, although the last tune cannot fully compete with the previous detonations) and the entire work presents itself as a furious manifesto of blackened thrash metal. Fans of Denouncement Pyre's "Almighty Arcanum" will enjoy this album as well. I guess I must call my boss, because I need a hiatus; it is time to take a deep dive into the Australian underground.