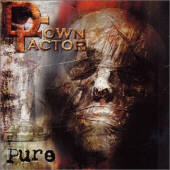 The titled of this review is how the very nice and professional promo package that came with the album describes Down Factor and their debut, “Pure”. I don't know about the Metal scene from Oakland, but I can tell you that this is amongst the heaviest album I received thus far as a reviewer.

Led by founding member George Anderson (vocals, rhythms and lead guitar), Down Factor gathers in its ranks with some of the most talented and extreme Metal musicians, namely Damian Lewin (bass), John Santos (rhythmn guitar) and Jon Riggs (drums). There is also a guest appearance by Steve Smyth of Testament.

They call their music Thrash/Death Metal. I'll buy that, but I'll also have to add a certain Urban Metal touch with social awareness, especially when considering the meaning of the lyrics. Here we are facing a band that not only play heavy music, but also a band that has something important to say. To emphasize this, the package included a description of each of compositions filled with insights. Subjects covered include law and politics (‘Open Your Eyes,’ ‘Judicial Hunt’), homelessness (‘Broken Shell’), drugs (‘In Vein’), the inner workings of a killer's mind (‘13 Crosses,’ ‘Psycho Killer’), and various other topics.

“Pure” is made mostly of straightforward but complex Metal that is heavily driven by guitar riffs and the crude but understandable Death vocals of Anderson. The rhythm section is highly syncopated and, as I found as being the case with many extreme bands, the guys are very talented, since the task is quite demanding for a human being. Still, this aggressiveness manages to be melodic enough, but not too catchy, to become suitable for some radio stations. Two instrumentals are going to open and close this opus of urban horror. ‘Pure’ is the dark intro made up of samplings that sound like industrial elements, vocal effects, and percussion. At the other end, ‘I, Mental’ is a musical massacre in the pure Death Metal tradition. In between you'll get plenty of numbers of the extreme nature that will bring any hardcore fan through hell (or heaven). Loads of guitar riffs and acrobatic drumming is waiting for the listener on songs like ‘In Vein,’ ‘Judicial Hunt,’ and ‘Broken Shell.’ ’Psycho Killer’ is a great song with a very good Death and Doom Metal atmosphere, conveyed by a slower pace but the riffs are incredibly “groovy" and the vocals are perfectly chilling.

Bottom Line: These Californian butchers have cut some excellent pieces of raw meat for your bloody taste.