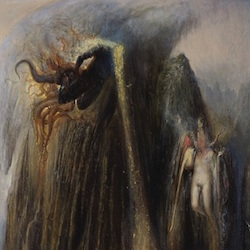 Over the last decade the number of original and memorable releases has definitely decreased. In an industry filled with cookie cutter bands being promoted, if you like that, then you'll like this. But, still sometimes there comes a band who doesn't follow conventional genre stereotypes, a band that doesn't so easily draw comparisons, sometimes there's a band...

...that band is San Francisco's Howls of Ebb. This being my first experience with the band, I won't be able to tell of progress or decline from their debut Vigils of the 3rd Eye. What I can inform you about is the genius that is Cursus Impasse: The Pendlomic Vows. The first thing that stands out is the guitar tone. They use a cleaner distortion. This is the first thing that separates them from their black and death metal peers. The bass compliments the guitars so well while each instrument gets equal representation in the mix. The sound is basement-esque. I believe this is intentional and gives it this decrepit feel.

The opener "The 6th Octopul'th Grin" blazes out of the gate deploying dissonant chords, thundering bass and rapid fire drumming. The vocals fall somewhere between death metal growls and black metal shrieks. In fact the overall sound is somewhere between the two genres.This is weird stuff. As I stated before, it is really hard to draw comparisons. Think somewhere in the realm of Hail Spirit Noir, with touches of Portal. However,that doesn't really do it justice.

Howls of Ebb, also know as HoB, capture and maintain your attention throughout the albums 7 tracks with dissonant assaults, amazing tempo changes, primitive barbaric drumming and tortured vocals. This all combines to give the listener a unique experience. This is more closely related to weirdo Norwegian progressive metal than anything in the black and death metal genres, but it is black/death metal. I love how strange it all is. If I had one complaint, it would be that some of the songs are arranged haphazardly. That being said, Cursus Impasse is a wonder piece of super-weird phantasmagoric black/death metal and Howls of Ebb are step ahead of their peers.