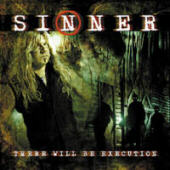 I’m always a bit skeptical when the front cover of a band’s album has the mug of the big ugly front man on it. Kind of like how in the band photos the other members are mysteriously enigmatic. Such can be said about Sinner and their latest album “There Will Be Execution.” To top it off, the band is named after the lead singer. By the time I made my way to the album title I was pretty sure that the cheese-factor would be fairly high. More or less, I was right.

Sinner plays a melodic metal not to far from Arch Enemy, without the death metal influence. They’re mostly a thrash-influenced outfit, actually. So, what did Sinner bring along for their voyage into the world of metal this time? Well, first a tight rhythm section that, performance-wise, offers little to complain about. Then there are the melodic guitar hooks. If guitarists Wolter or Naumann did those horrible pinch harmonics any more often, I might be inclined to set them up there with Zakk Wylde for the lame musician award. Also we’ve got plenty of typical 80’s style metal soloing, but I digress. Again, they’re a strong duo performance wise. Vocally, Mat Sinner is about as cheesy as they come. He’s no James LaBrie, though. Instead, more of a poor man’s rendition of Warrel Dane. Of course, what would “There Will Be Execution” be without such thought provoking song titles as ‘Higher Level of Violence,’ ‘Die on Command,’ and ‘Liberty of Death’?

As an overall band, Sinner isn’t that bad. Besides the self-indulgent playing – in which the ‘musicians’ treat their playing as more of a sport than an art – things are pretty well constructed. The riffs are half decent and for those times when you’re in a shredtastic, carefree mood this type of music does the trick. However, Sinner is about the last band I’d go for if I wanted to hear this type of music. It’s simply done much better by other bands. Everything on “There Will Be Execution” is just kind of unimaginative.

Bottom Line: The problem with Sinner isn’t that they’re a bad band. The problem is that it can be done better, and it has been by many bands.