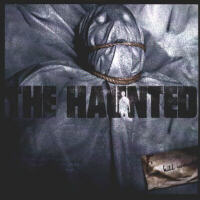 During the first years of the band's existence, the name The Haunted stood for high quality thrash. The approach of the quintet was neither old school nor overly modern and due to the enormous energy level of their most aggressive tunes, the guys became quickly a force to be reckoned with. The ironically titled third album proves evidence that The Haunted were definitely no one hit wonder. The eleven tracks have a lot of exciting moments. Okay, I cannot deny that the dudes run slightly out of ideas at the end of the album ("Downward Spiral", "Bloodletting"), but the merciless title track on the final position of the song list is a good compensation for the less strong numbers. The band drops its ultimate bomb and "One Kill Wonder" (the song) leaves no stone unturned in view of its compact rudeness.

The rapid title track belongs to the highlights of a full-length which does not modify the well-known style of the formation in a significant manner. Okay, "Everlasting" starts very fast-paced and ends almost relaxed, while the staccato riffing of "D.O.A." contributes a formerly not used approach. But these details do not define the music of The Haunted newly. Riffs from the archives of Hanneman (R.I.P.) still show up and the unfriendly voice of Marco Aro does not deliver formerly unknown facets. I like this kind of reliability or "positive stagnation", because the band finds always the right mixture of melody and brutality. It might be a stale stereotype to start the album with the fast and mean "Godpuppet", but come on, a good frontal assault is a good frontal assault, regardless of its position. And, by the way, the intro evokes a Wild West feeling - so this might be a small surprising detail for those of you who are interested in modifications.

Of course, the album boasts with its flawless production. Do not ask me why or how, but Swedish bands seem to be the kings, both in terms of technical and musical skills. One Kill Wonder exhibits a great portion of pressure and sharpness without asphyxiating the energetic drive of the songs. For example, the beginning of "Demon Eyes", an instrumental, offers rather airy tones. Speaking of this track, it relies on a decent mix of heavy riffs and comparatively excessive leads. Sometimes it is not easy to integrate such a slightly different number into the flow of an album, but The Haunted are experienced enough to master this challenge - and the following "Urban Predator" brings the band back on track in a matter of seconds. For people like me who just can't get enough of these highly effective, Slayer-inspired riffs while kneeling in front of their "Hell Awaits" altar, songs like "Urban Predator" or "Shithead" give the album that extra something, not least because the dudes from Northern Europe link this guitar work with catchy (yet harsh) sections.

All in all, this mix of aggression and hatred is on an equal footing with its precursors and I am happy that the German Metal Hammer magazine featured the album's bonus track of the Swedish edition. I am speaking of the dense "Creed" which opened an issue of the magazine's "Off Road Tracks". The number shows the typical approach of the formation. It cannot compete with their best songs, but it is also no scrap material. So try to get as much as you can from One Kill Wonder, you will not regret it.

I have always been a big fan of The Haunted. Hell I guess it goes all the way back to the days of At The Gates. These guys just seem to have a nack for thrashing like no others band can. Upon first listen of their latest opus "One Kill Wonder"I must admit I wasn't impressed. I mean it was good, I could hear that, but all I could think of was "Where have the grooves gone? Where is all the catchiness from the band I know and love? What is with this new production?". Needless to say I didn't leave it in the CD player too long at all. I spent the next few days thinking "No, I must be wrong, I’ll give it another go.." And it seems I was...

For those of you who have been following The Haunted from the beginning this album is a different offering. It is still them, as in its still fast, aggressive and thrashy... but something has changed. At first I didn't know what it was, but as I listened to "One Kill Wonder" more and more I came to conclusion that instead of mellowing out with age, these boys are getting angrier! This is definitely the most aggressive and heavy album to date, taking everything The Haunted have done up until now to a whole new level.

The overall sound of this album is much larger than previous releases, it is more reminiscent of The Haunted's first self-titled release in its overall sound, but a much better planned and executed version. The sounds themselves are all individually much larger than "The Haunted Made Me Do It", the only problem is that they are not necessarily better, just bigger. I read that the arrangements and sounds on the album were all created with the intention of making the album as close to a live performance as possible to make both experiences of equal quality and power, and after seeing the boys for the second time this week I will have to agree, their live sound was almost identical to the new album which is always very satisfying for the listener.

Bottom Line: All in all I cannot complain about this album. Yes The Haunted have strayed a little since the days of "The Haunted Made Me Do It", but after only a few spins you too will come to realize that there is absolutely nothing bad about the new direction.