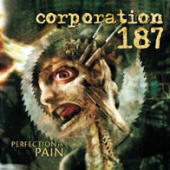 What it boils down to when you’re listening to good music isn’t how amazing the musicians are, how original the compositions are, or how creative the music is. For each band that excels in one of those areas there is another band that doesn’t but is equally as credible of a band. When I come across a band like Corporation 187 and I can pick up immediate influences, it might be a bit discouraging to not hear a band that has a true left-field way of thinking. But by the time I get to the opening of their second album, “Perfection in Pain,” I know that it really doesn’t matter.

What truly matters is that the band in question can write good compositions. Ones that have ideas in them that are simply fantastic, ones that have the necessary hooks in them, and ones that arranged excellently and have good transitions. Corporation 187 does extremely well in all of those fields.

You’re probably wondering to yourself what those immediately recognizable influences in Corporation 187’s music are. Take the melody that At The Gates used in their pioneering Swedish death metal, but up the aggressiveness to the same plane that The Crown exist on. Then, it probably wouldn’t hurt to throw a little of The Haunted in their for their obvious thrash influence. Then, you’ll have somewhat of an idea of what Corporation 187 sounds like.

Let’s be frank for a moment: every song on “Perfection in Pain” is a true killer. Most of the guitar riffs on this album are without a doubt worthy of being part of any of Corporation 187’s influences musical history. They slay like they oughta’ slay! The drums, too, hold enough power to bring recognition. Vocally, Filip Carlsson has enough rage in himself to last the whole band a lifetime. Finally, when it all comes together it shows that Sweden still has what it takes to put out some truly great death/thrash.

Bottom Line: If you didn’t get the message yet, get it now. Corporation 187 and “Perfection in Pain” are two things you should definitely check out.