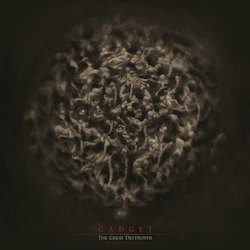 Type: Full-Length
Release Date: March 11th, 2016
Label: Relapse Records
Genre: Grindcore
1 Enemies Of Reason
2 Känslan (Post Patch Anxiety)
3 Pillars Of Filth
4 Choice Of A Lost Generation
5 From Graduation To Devastation
6 Dedication
7 Violent Hours (For A Veiled Awakening)
8 The 02666 Heritage
9 The Great Destroyer
10 Down And Out
11 In The Name Of Suffering
12 Lost On A Straight Path
13 Forsaken
14 Collapse
15 The Lack Of Humanity
16 Svart Hål
17 I Don't Need You / Dead And Gone
MetalBite on YouTube
MetalBite on YouTube

This year is an extremely fertile one if it comes to high flying grind. At the beginning of the year Unborn Suffer fired out Nihilist, later a great album by Rotten Sound, and now Gadget. If Dead Infection eventually decides to reveal their hidden and long awaited opus magnum to us, I’m going to have to call 2016 the year of the grind.

The Great Destroyer is only the third album in nearly 20-year history of those grinding Swedes. Gadget never has sinned with regularity and consistency with the production of their publications and for the last one, quartet led by William Blackmon, had us wait for 10 full years. The Great Destroyer includes 17 tracks, lasting a total of less than 27 minutes. Third album, similarly to previous productions of the Swedes, provides a solid wall of sound strongly aggravating hearing apparatus. It's actually a 16-series mini-gun shot completed with sludge-stoner explosion. William Blackmon himself made sure of the quality of the recordings and I have to say that this is the best music publishing/production of Gadget, including the album cover. The sound is extremely readable, but at the same time harsh and coarse just like this kind of music should have.

I dare to say with full responsibility that this is a very good album worthy of attention of not only fans of grind core, but all the maniacs of heavy sounds. Although Gadget Anno Domini 2016 is mainly early Napalm/Nasum grind, we find a lot of slow sections (beginning to From Graduation To Devastation, In The Name Of Suffering), and ending I Don't Need You/Dead And Gone, it's one big, psychedelic drone lasting five and a half minutes.

Favored tracks: Pillars Of Filth with the theme a'la Carcass, death-like The Great Destroyer, The Lack Of Humanity and Svart Hål. We also cannot forget to mention of the friendly participation of Barney Greenway of Napalm Death on Violent Hours (For A Veiled Awakening). To sum it up The Great Destroyer is a heck of a decent grind record with a tight punk/death metal character. Maybe it isn’t groundbreaking, maybe not too original, but what a beating it provides!!

Gadget put the pedal to the metal with their grindcore style. This is fast music that has a great deal of style regardless. It is similar to Nasum and their ability to wreak havoc to everything possible.

Sure, the music zooms by at a million miles an hour, but what’s not to like about that? This is grind in the purest sense of the word. It is also at its most abrasive, which is nice. There is a noticeable buildup of tempo and feeling from the beginning of the disc that culminates in the final track I Don’t Need You - Dead and Gone. This fiery nature continues to be a strong point for bands of this genre and the progression of this feeling on the disc is interesting. There is certainly an aggressive approach to the band that flows well throughout the length of this release. Whether they are as dynamic as Nasum is a mystery, but they are certainly as abrasive. It’s very welcome to hear this type of grind approach working out and it catches the listener’s attention greatly. The guitar riffs are very strong and catapult this release instrumentally. The rest of the instruments fill in their place and make this a well-rounded listen overall. It all results in a violent listen that is well-balanced. There is truly a method behind this madness and it complements the overall picture nicely. The song-writing is fairly strong and blends nicely with the abrasive nature to be found here.

When all is said and done we are left with a solid grind recording. It isn’t overly long which might lead some listeners to prefer to hear more material. Standout tracks are hard to determine, but the title track is a mighty one that features a cool breakdown towards the end. Grind fans will be left happy with The Great Destroyer.