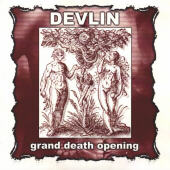 Despite the fact that Devlin began in one form or another in 1994, it wasn't until the year 2002 that Marcus Ehlin (vocals, guitars, keyboards) and Lexi (lead vocals) released their debut, "Grand Death Opening." Marcus, who decided to record a three-song demo at the end of 2001, submitted it to Napalm Records who quickly offered him a deal. After parting ways with his previous lead female vocalist, he found Lexi only weeks before he entered the studio to record the debut album.

The product of Ehlin leaving his previous band Siegenbürgen to pursue Devlin is a less than original light gothic metal album with female vocals, and the occasional male growl. You've heard it before, trust me. The female vocals really brighten up the atmosphere of the music, and are quite well performed. Considering that Devlin aren't all about being completely too dark and twisted, the music on "Grand Death Opening" is relatively light-hearted, especially for something with distorted guitars. On top of everything is a slight use of keyboards courtesy of Ehlin, to texture the sound and fill it out.

That's basically it. Devlin doesn't really step up to the plate on "Grand Death Opening," unfortunately. The song writing is good, and there isn't any arguing about that. But to be honest, it's uninspired, and subsequently boring. There are some really nice and enjoyable moments, and a few things that jump out at you occasionally, but other than that "Grand Death Opening" feels like a piece of work that Ehlin and Lexi didn't really put too much time into perfecting. Not only do they sound like they're bored with the music in their own songs, but their cover of Billy Idol's 'White Wedding' is also the same, proving that their hearts weren't completely into the performance.

Bottom Line: "Grand Death Opening" is a decent debut album, but it doesn't quite make the cut deep enough to really be taken seriously. I see Devlin as a band that could strike back with a follow-up that is very good, but for now their debut is just good for a rare listen.