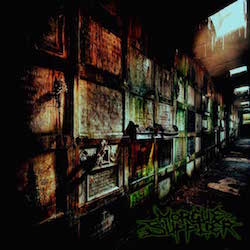 Death metal has seemingly regenerated itself in recent years with a newly emerging underground of bands that are creeping up into the stream like a disgusting John Carpenter fog over a sweltering grassy knoll. What once was a genre spilling over with over-produced, under-talented mall bands aligning themselves with the death metal tag has quickly reinvented itself by disallowing the garbage to stink up the premise and offering new, exciting bands with which to enjoy good music. While not new to the scene, Chicago's Morgue Supplier is back after a long seven-year break, not counting the Bringer of the End single back in '13. The newest offering is aptly titled Morgue Supplier and not a single step is missed.

Chicago has become a mecca for solid underground death metal in the last two decades with Cardiac Arrest, Kommandant, Imperial Savagery, Sons of Famine and Morgue Supplier leading the proverbial charge. For something dirty, savage and brutal, Morgue Supplier adds an element of violent filth to the already scum-filled city streets. What is innately alluring about this band is the combination of truly volatile-sounding music that makes one feel like he or she is a in a mixer of dank air and entrails and the lyrical content that can only be described as 'bleak story-telling' under the guise of three-minute musical paragraphs. Vocalist and main-man Paul Gillis provides a surreptitiously varied range between the low growls of brutal antagonist and the high screams of tortured victim so well that it's hard to get a feel for who is leading whom throughout the album (though I'm sure if you ask the man himself, he'd surely adopt the antagonist's role). Either role is easily enjoyable, and Gillis is a true master at issuing a deadly fatwa in 14-tracks that are ugly and wonderfully disturbing.

So, keeping time with the lyrics, there is a recurring theme in the album of death and its various implements, of course, but each track seems to hold a court all its own in how life's grandest mystery is either obtained or imagined. In short, these short epics are exactly what true death metal is supposed to be. I'm not sure exactly where it all went wrong with some bands dragging on a stale idea through elongated six-to-seven-minute individual snooze fests, but it's refreshing to see a band call upon the glory days of 'in-and-out' to a near-perfect degree. "Destroying a Human" is one of the more battering tracks I've heard in some time, complete with fantastic time changes and a veritable step-by-step into the wondrous world of mutilation. When you hear how you got torn without a drop being spilled, you somehow feel strangely complete and newly cleansed.

It's a difficult feat these days to be able to write engaging, interesting lyrics about everything from casual evisceration to ostracization for one's beliefs, the latter coming from one of my favorite tracks on the album, "Heathen (The Throes of Poison), but the band does that and then some. I've always been a word man, both in writing and ingesting, and while the entire CD is one of tangible versatility, this track stands out for me personally. Couple this with a tremendously intense musical assault that, while 'airy' and thick, never gives way to over-production or outright loudness for its own sake, and you have a classic in the making. The music, both disturbing and tempestuous, affords us the opportunity to place a soundtrack to the various nightmares we keep locked away in our own heads for the betterment of humankind. It's really good to see that the long layoff between releases hasn't dulled the senses or quelled the violence sitting in this bands' collective gullets.

This CD is limited to 500 copies, so be quick to grab one when it's released next month. Morgue Supplier is, in basic terms, one of the finer elements of modern death metal if your personal choice is a sick, demented foray into all things absurd and hauntingly addictive. Another notch of Chicago pride lies in the well-worn belt of metal music.

Ugly, unrelenting, fierce and brutal. Those are just a few words one might use when describing Chicago, IL death grinders Morgue Supplier. The band came into existence in 2001 and along with a few lineup changes have managed to churn out a decent amount of material since. This self titled release is Morgue Supplier's second full length album and is sure to turn some heads in the extreme music scene.

It's always important that an album grabs your attention immediately. There's not one track weaker than the other on here, but the stand out would have to be the opener, "Heathen (The Throes of Poison)". It ultimaley captures the entire essence of Morgue Supplier's sound.The right amount of tempo changes combined with the rabid vocal stylings of Paul Gillis and chaotic yet melodic guitar parts are what keep the opening track as well as the entire album feeling fresh upon each listen.

Clocking in at forty minutes, Morgue Supplier's s/t is sure to please new and old school death metallers alike. The songs are very well composed and full of substance, something that seems to be lacking with many of their peers. Grind has always been considered a melting pot of genres and although there's not a whole lot of ground breaking material on this album, Morgue Supplier certainly covers all the bases and does so at full force. It makes for a entertaining and pleasurable listen and since there's a lot to digest, it should hold us over for the band's next release.