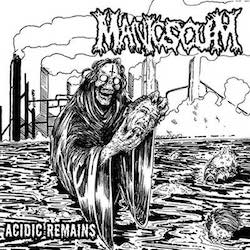 Let it be known that before giving this promo a listen, I'd never heard of Manic Scum. After listening a few dozen times, I'm glad to know the powers that be at Unspeakable Axe had and saw them as a valuable asset to their label. Hailing from Kingsport, TN, this carnivorous quintet pull their influence from a myriad of classic American death metal bands. Think the brutality of early Cannibal Corpse and Suffocation mixed with the technicality of Death and a splash of blood and guts ala Autopsy.

With only four songs and topping at a "whopping" fifteen minutes of play time, Acidic Remains will leave the most casual to diehard death metal fans craving more. The standout track on this EP by far is the title track, "Acidic Remains" as it is the true culmination of all that makes Manic Scum enjoyable.

In a time where computer programs are used heavily to help create music, Manic Scum bring death metal back to the basics with a stripped down sound. Without revealing my age too much here, this is the type of death metal I remember hearing as a teenager first exploring the world of underground metal. Brutality in it's purest form. Keep an eye out on future releases from these guys. I know I will.