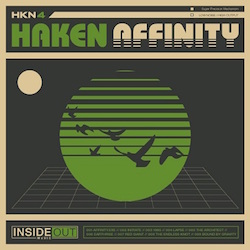 Haken has been producing quality progressive metal albums for some time now and there is no exception with Affinity. It has a more modern and pristine sound than previous albums. However, the progressive framework that was present on The Mountain is still largely there, although it is now more refined.

Much like the recent Anubis Gate material, it seems Haken is trying to push towards a more poppy and more accessible sound. Fear not, there are still a lot of progressive elements to be found on the disc. They are more streamlined now than ever before, however. The music still has a great shout to the progressive acts of the yesterday like Yes, but now can be found more nods to the likes of Dream Theater as well. The conglomeration works well enough for Haken, as Affinity is indeed a splendid piece of music. There are synths used a great deal and they add character to the songs. The songs are still filled with enough nuances and outstanding guitar riffs to be distinctly Haken in nature, despite the movement towards accessibility. I like the music here, but am somewhat hesitant to see what the band produces in the future. Even the lighter moments, like those found in the beginning of the closing track Bound by Gravity, have enough spice to attract the listener. In fact, this combined with The Endless Knot form an excellent closing portion to the disc. Similarly, the early tracks on the album stick out enough to make the beginning moments something interesting.

Taken all together, the album is consistent and enjoyable enough to make its mark. Still, the fact that this is one of the better albums of the year so far doesn’t bode well for the year overall. There simply have been a lot of very good releases so far this year and not enough great ones, like this. Affinity is memorable, thoughtful and fun in equal measures.